Though a successful business is judged by concrete metrics — sales, profits, share prices and the like — the characteristics that make it successful are invariably intangible, even hard to define. Does management exhibit genuine “leadership?” What does good leadership even look like? Is the company “innovative?” How can you tell? And what exactly makes it innovative, or keeps it from becoming so?

Finally, how about that most nebulous of all concepts: “Culture.” How do you create one that fosters leadership and innovation? Why don’t more companies do it right?

Those questions, among the toughest in the business world, were tackled head on at the Mack Institute for Innovation Management’s Spring Conference 2015, held at the Wharton School’s San Francisco campus. The day-long event brought together Wharton experts studying innovation-related issues, along with business leaders with a track record for making innovation happen.

The goal was to give participants an early look at the ideas that might soon become commonplace in business; tomorrow’s versions of such key business trends as “disruptive technologies” or “open innovation.”

How Strategic Leaders Shape the Future

The day was kicked off by the institute’s research director, Paul J.H. Schoemaker, who is also chairman of Decision Strategies International. Schoemaker framed the day’s discussions with the question, “What is strategic leadership in the context of managing innovation?” 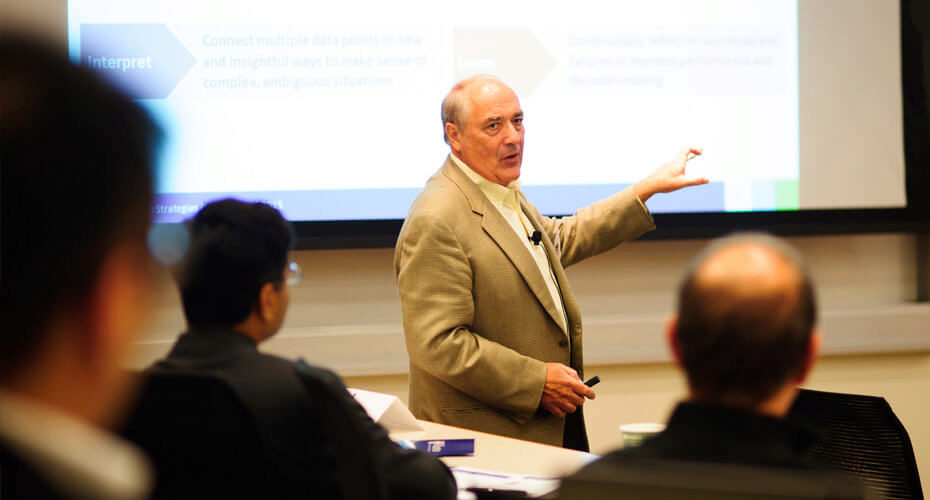 Put another way, how should a manager handle a world that is volatile, uncertain, complex and ambiguous?

There are, he said, several elements of successful strategic leadership. They include anticipating changes, challenging one’s self and one’s co-workers, successfully connecting the dots to properly interpret signals from the environment, and having the courage to make decisions even when the information at hand is incomplete.

In addition, said Schoemaker, leaders need to get others in the organization involved in meeting its challenges, and to learn from experience. “It’s important to continuously reflect on success and failures, so you can change your decision-making to adapt,” he said.

One of the challenges for managers involves being sensitive to cultural issues, including those that change from country to country. An example he gave involved what he called “power distance,” or how formal or familiar one should be with one’s superiors. Schoemaker told the story of an American working in Tokyo for a Japanese bank, who one morning found himself in the elevator alone with the bank’s president.

In a casual American manner, he introduced himself, but received a distinctly chilly response. He was puzzled by the executive’s reaction until a few days later, when he received an email explaining that “if the president wishes to speak to someone, he will initiate the conversation himself.” 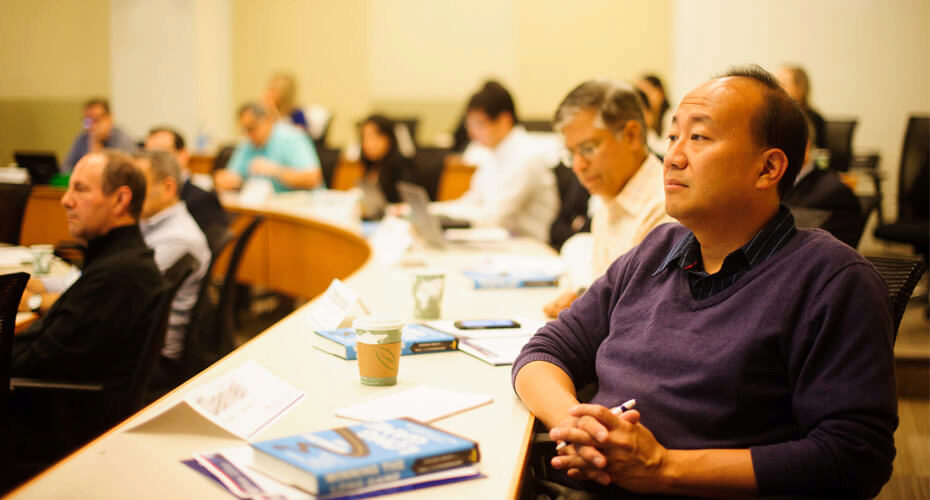 Schoemaker spent much of his presentation discussing planning, telling his audience how important the activity was, and how it was essential for planning to be done realistically.

“You have to be honest,” he said. “You can’t assume the future will be all good. A good rule of thumb is to have four different scenarios, each of them involving four varying degrees of challenge and opportunity. Then, make sure your strategy can accommodate all of them. You need to have a portfolio of options that will allow you to succeed no matter what the future brings.”

At the same time, Schoemaker said, one shouldn’t be afraid of failure, telling the story of the father who at every Sunday dinner asked his children how they had failed during the preceding week. “What he was really asking was whether or not they had tried something new,” he said. Schoemaker emphasized that some degree of failure is a necessary price of success (as more fully argued in his book Brilliant Mistakes from Wharton School Press).

Using Collaboration to Drive a Culture of Creativity and Innovation

The next speaker, Gerard van Grinsven, CEO of the Cancer Treatment Centers of America (CTCA), took on the topic of “Reimagine: Using collaboration to drive a culture of creativity and innovation.”

Van Grinsven came to CTCA from Henry Ford Hospital in West Bloomfield, Michigan, helping lead a hospital in an economically challenged area to become one of the most respected hospitals in the Midwest. Previously, he spent two decades in the hospitality industry.

“I came to CTCA shortly after losing my father to cancer. Little did I know that my career would come full circle…with a bit of a twist.”

He explained that “integrative care” services had been one of the key differentiators for CTCA for a long time, but it had become increasingly difficult for cancer patients to understand the differences between CTCA and other local hospitals that emulated its message. 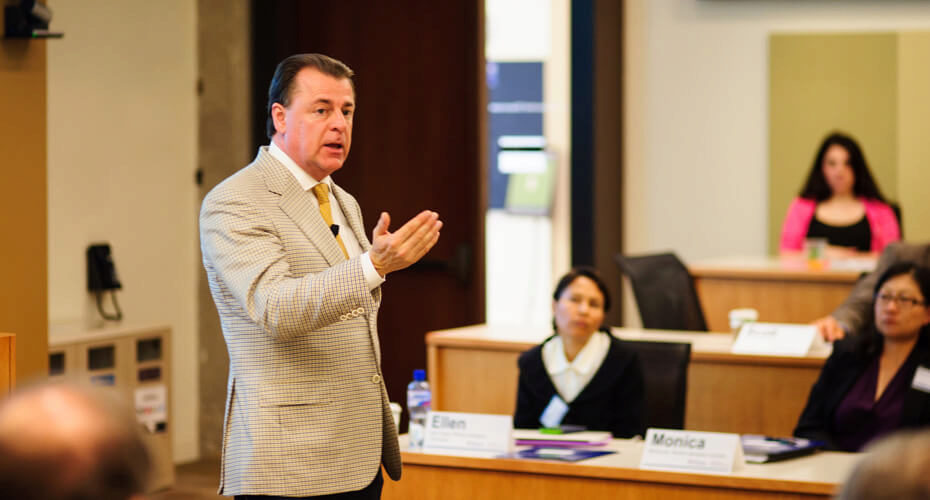 “When I entered the company two years ago, the market had just been hit by the Affordable Care Act, which accelerated market changes, the speed of which no one had seen before. As I learned from my previous change experiences, engagement of our workforce — whom we call stakeholders — would be essential. I knew that for change to last, it had to come from within. We have more than 6,000 stakeholders; they would be our best ‘consultants.'”

With this stakeholder involvement, he launched an effort called Reimagine, which helped to save the company significant “outside consultant” investment. Still in the process, he explained that a five-year strategy is in place to foster continued growth and stay true to CTCA’s patient-centered model.

One of van Grinsven’s goals for CTCA hospitals was to deliver to its patients the kind of care they wanted.

“CTCA started with a philosophy called the “Mother Standard” of care: If it were your mother or someone you loved, how would you want her or him cared for? Reimagine didn’t change our mission, vision, or values. It gave us insight on how to build on our success and define how we’ll deliver the next generation of care at CTCA.” 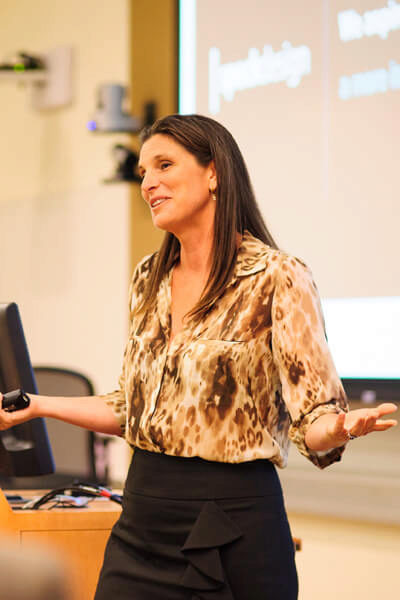 The conference next went into workshop mode, with a presentation by Elisa Jagerson, CEO of Speck Design, the Silicon Valley design firm known for redesigning everything from consumer electronics to business processes. In her presentation, Jagerson spoke of the need for managers to be aware of the “emotional drivers” that affect a consumer’s decision to buy or not buy a product, often without the consumer even being aware of them.

Jagerson ran an exercise in which conference participants listed the emotional drivers of some regular event in their lives, and then attempted to figure out how the event might be re-designed to help the desired emotions surface and improve the process.

One participant spoke of evening dinner, and how the rush of preparing it prevented members of the household from calmly discussing their day while eating, since preparation would take so long that there would be no time left for conversation. It was suggested that mealtime in the house be redesigned so that cooking time could also be used to catch up, not just the moments when diners were actually sitting at the table.

Watch: Elisa Jagerson’s Talk on creating a culture of innovation

Following lunch, attention shifted to the Philadelphia campus, by way of telepresence technology that allowed three researchers demonstrate business scholarship in action and bringing conference participants up-to-date on their recent research sponsored by the Mack Institute. 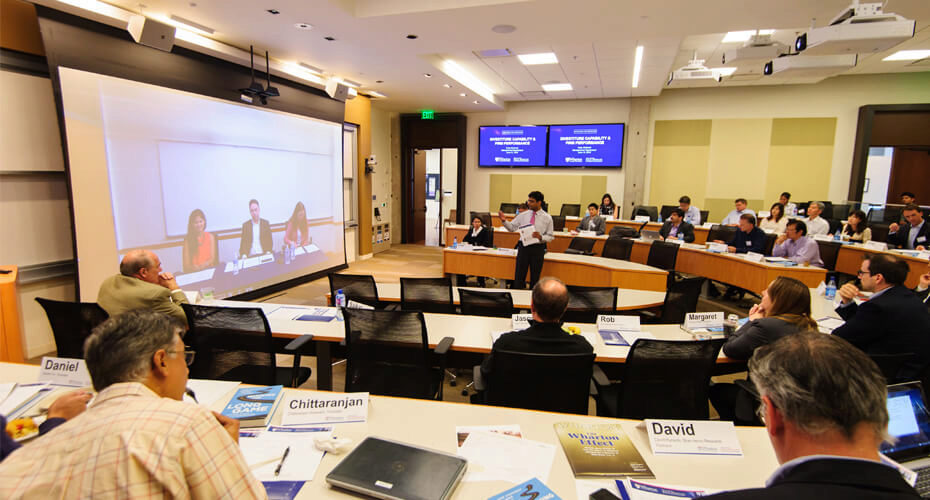 Patia McGrath is exploring business divestitures, and said while the practice is common, there has thus far been little scholarship (compared to the flip side of acquistions) about the optimum method that businesses should use in going about divesting a unit. She said that was largely the result of divestiture being seen as something of a failure; or, as it’s sometimes put, “There is no glory in divestiture.”

But McGrath said that attitude works to the disadvantage of companies embarking on a divestiture. “Firms are going to leave money on the table if they don’t learn how to divest well,” she said.

Andrea Contigiani told the conference about research aimed at unearthing what motivations and biases entrepreneurs have in common with each other. “It’s important to understand the relationship between the two,” Contigiani said.

The study, which will target 1,200 entrepreneurs in coming months, aims to supplement the existing literature about entrepreneurial innovation. Contigiani noted that earlier scholars have reached sometimes surprising conclusions, such as the fact that over-confidence can sometimes actually be a good thing in entrepreneurs, since it causes them to be more innovative.

Gundeep Kaur (WG’15) described her participation in the pilot semester of the Mack Institute’s Collaborative Innovation Program. She worked on a cross-functional team to devise a strategic action plan for one of the institute’s corporate partners in the Internet of Things domain. Kaur shared what she’d learned about the structures that need to be in place for innovation to be successful. “Innovation needs discipline,” she said. “It’s not a matter of simply having a lot of ideas.” 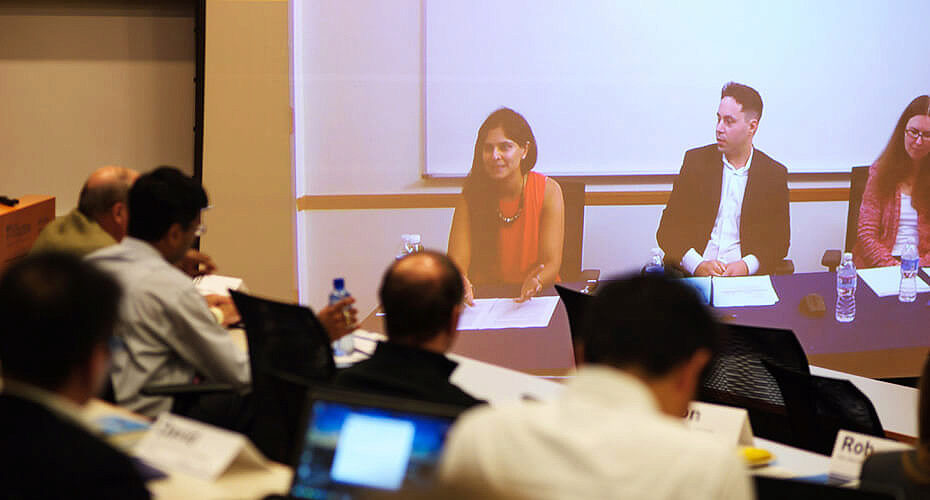 For the final panel of the day, participants heard from managers at several big companies who were all struggling every day with real-world innovation issues.

Nate Fink, director of engineering for Yammer, an enterprise-oriented social media product owned by Microsoft, spoke of a crucial change that had been introduced into his unit: Shorter feedback cycles.

Fink said that his programmers had the ability to quickly rewrite code as product needs changed, but they were hampered in their efforts by lengthy product review cycles, some of them scheduled in advance with no regard for marketplace dynamics. The answer, said Fink, was to provide feedback and reactions on a more ongoing basis, and to judge programmers on the quality, not the quantity, of their lines of code. “We had been measuring people by how much they delivered, not the value of it,” he said.

Watch: Nate Fink’s talk on seeing the good side of failure

Next, Chittaranjan Keswani, director for engineering at Teradata, the and analytics company, discussed the company’s 2011 acquisition of Aster Data Systems, an analytics start-up where Keswani worked and whose track record of innovation Teradata wanted to protect.

The process, he said, involved taking things slowly, and respecting the feelings of the new employees being brought into the company. Teradata kept the roadmap unchanged and provided independence. This allowed the start-up level innovation to continue. Aster people were given executive management seats, as well as key leadership roles. “You want to give them input into the company, so they can provide resources to help it be even more successful,” he said.

By carefully developing a strategy for the acquisition, and clearly explaining it to everyone involved, Keswani said that Teradata was able to make the acquisition a major success, with Aster now making important contributions to the company.

Scott Snyder, president of Mobiquity, Inc., which develops mobile phone applications for other companies, said his engineers and designers are forced to remain innovative by the relentless competition in the mobile app space, where thousands of new programs are always competing for a user’s attention.

“Mobile users will only spend a minute or two evaluating a new app,” he said. “That means that there are a lot of things that can kill the mobile experience, like a sign up process for new users that simply takes too long.”

With the event wrapped up, Schoemaker returned for a few closing thoughts. One was that companies need to avoid being too closely tied to their organization charts; individuals should have the ability to act in ways that are important to the enterprise at a given time, regardless of what their job description might say.

And, he said, companies need to be aware of things that are happening outside of their own organizations. “Cross-fertilization is very important,” he said. “Many companies believe that their problems are unique, but more often than not, someone else has already solved them.”