When a Microsoft executive floats a game-changing idea about the delivery of software to a distinguished group of academics and industry leaders, he gets their attention.

“Just suppose Microsoft offered selected customers the option of only paying for the applications they were actually using and only for their usage time, similar to the way GE is billing their jet engine customers for their engine air-time,” said Todd Rawlings, Microsoft’s senior quality engineer for Corporate Business Excellence.

“Not that this usage-based billing idea is in the pipeline yet, but I wonder if this would help companies better manage IT budgets,” he added, as more than a few heads in the room bobbed affirmatively, eyebrows headed skyward. 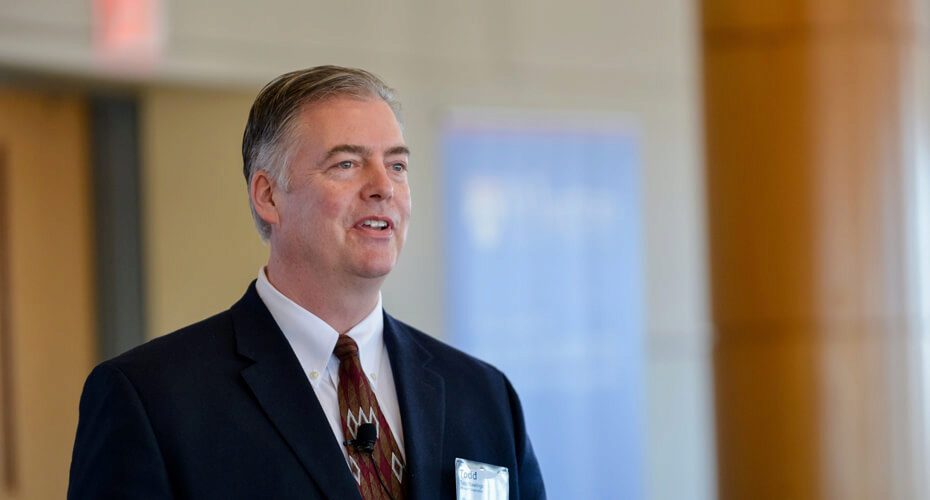 Rawlings’ idea was one of many creative solutions posited at the annual Mack Institute for Innovation Management Fall Conference held in November 2015 at the Wharton School in Philadelphia.

George Day, faculty emeritus in residence at the Mack Institute, challenged participants to change places with their consumers in order to understand the barriers to purchase in a fast-moving and highly competitive market. While changing places is hardly a new concept in business management, the title of the conference — Strategies for Success in the New Era of Connected Ecosystems — stressed the urgency and perspectives required to ferret out a kernel of opportunity when digital technologies change all the rules. Some speakers cited business models that embrace partnerships and collaboration as windows for growth and innovation. Others are test-driving “institutional creativity.” Two years ago, for example, Colgate-Palmolive launched an elite team of employees with no other responsibilities than to discover the next blockbuster product.

“We look for solutions to needs consumers don’t even know they have. Our existing innovation teams focus on core and incremental innovation. They do a great job or we wouldn’t have the most popular toothpaste on the planet,” said Jenny Gomez, worldwide director of Global Strategic Innovation and Growth Initiatives for Colgate-Palmolive Company. 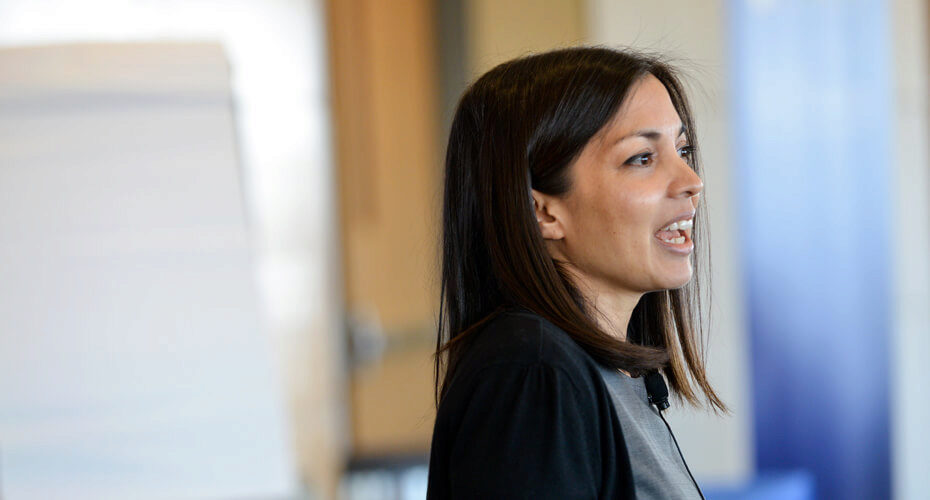 “Our job is to explore and incubate, then hand the idea over to development. It’s high touch because there are so many silos to connect. We look for partnerships through academic and technology scouting, technology incubation, and strategic suppliers.”

At Microsoft, similarly, employees are encouraged to tinker after work on anything they want, with space and resources provided by the company.

Regardless of a company’s incentives or approach, participants agreed: 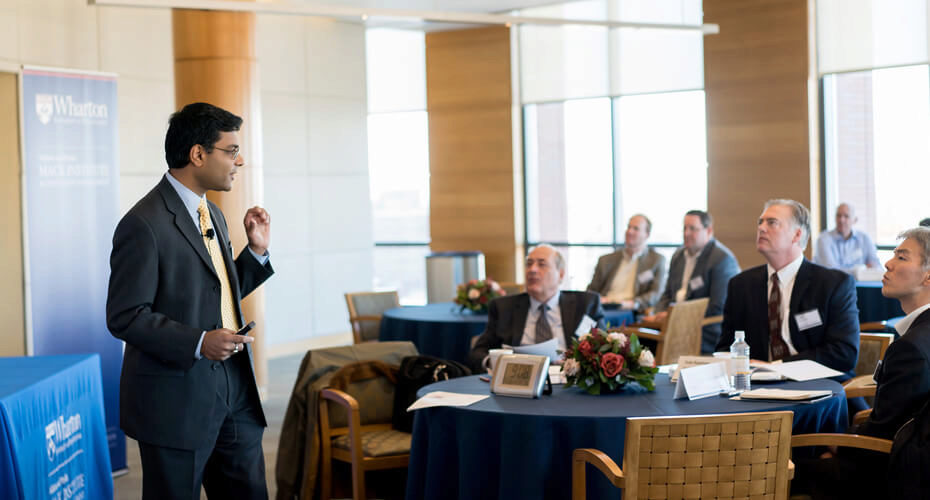 While changes in technology and science are profound, the creation of a new breed of consumer is turning the marketplace upside down, said Saikat Chaudhuri, executive director of the Mack Institute. Tech-enabled consumers are fueling new businesses, like Uber, Lyft, Airbnb, and Tinder, and they circulate product reviews that are far more powerful than traditional advertising. This size and clout of this is group is redefining the meaning of media. Word of mouth no longer has anything to do with conversation. The reality is that a single, happy/angry consumer can connect with an untold number of likely buyers with a keystroke.

Meanwhile, the introduction of self-driving cars and Amazon’s drone delivery service confirm that the future is now.

Technology has forced the global music industry to change its business model multiple times to survive, said Chaudhuri: from vinyl, to disc, to iTunes with the advent of digitized payment, to subscription services such as Pandora and Spotify via mobile streaming.

At the same time, rock-steady telecommunications companies are challenged by regulations, and former start-ups, like Google, are getting older and less agile. 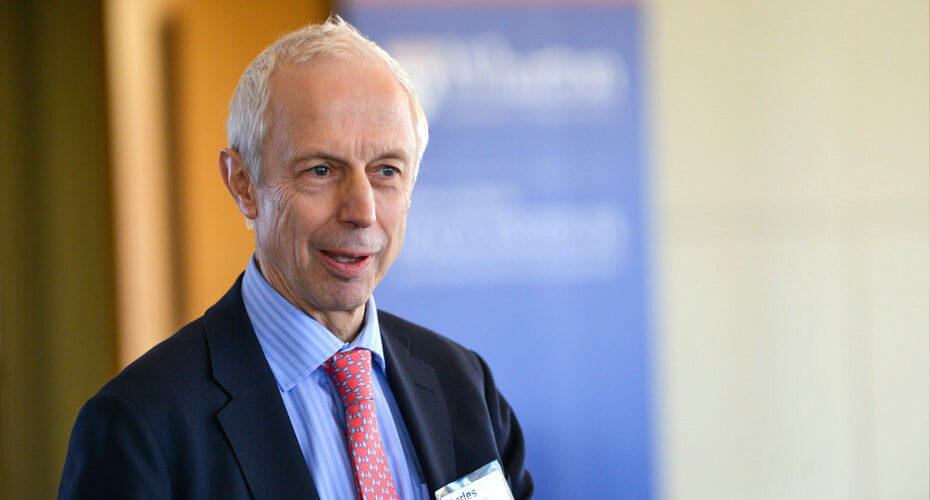 In any industry, business models that don’t engage consumers are losing out to those that do. “In the traditional product business model, a company sells X to a buyer and delivers it. When it breaks, and you don’t know how to fix it, the company charges you a fee for a service call. In contrast, with the solutions business model, customers are more involved in the design of product or service, and have the promise that the product or service will always be there and working when it is needed.” said Charles Baden-Fuller, Centenary Professor of Strategy at the Cass Business School, City University London.

Democratization of the Cloud

A sea change occurred in the late 1990’s with the “democratization of the cloud,” opening up vast resources to small, nimble start-ups, said Martin Creaner, corporate strategy advisor at Huawei. Historically, only large companies with deep pockets could afford the technology and data storage required to succeed, but the cloud eliminated those barriers, making data storage available to all. “The cloud, in conjunction with social networks, has expedited the volume and speed of just about everything.” 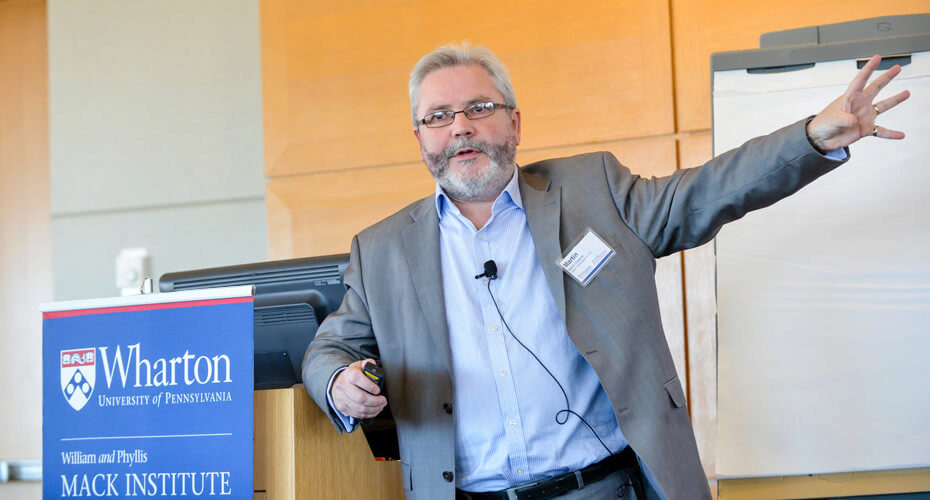 By comparison, telecommunications companies have remained static. “After being fat and happy for decades, they’ve missed the boat so far. Like a surfer waiting for the next wave to come along, but always too slow to catch it,” Creaner observed.

The industry is in need of a ten-year transformation plan to monetize its unique assets, or other providers, like Skype, will continue to eat their lunch.

“U.S. companies are reluctant to break into smaller units, but the regulatory challenges may be too strong for them to avoid it. They have to learn to navigate the future, not control or change it,” added Creaner.

Read more of Creaner’s comments on the the future of telecommunications in the Internet of Things era.

When Ford reintroduced the Fiesta in 2009 it took a novel approach that paid dividends. The company selected 100 people with large social networks from 4,000 applicants to drive a new model Fiesta free for six months in exchange for posting their experiences on various online communities.

Ford gained over 2.5 million new Facebook and Twitter fans during the campaign and pre-launch awareness of the Fiesta rose to 37% among its target market of 16- to 24-year-olds. In addition, Ford received 50,000 requests for information about the Fiesta in the first six days of sale. The driver-generated content also became fodder for the company’s future TV spots and print ads.

“Ford understood the power of social media,” said Professor Wind. “The bottom line is consumers don’t trust corporate America any more than they trust politicians. They do, however, trust other consumers.” 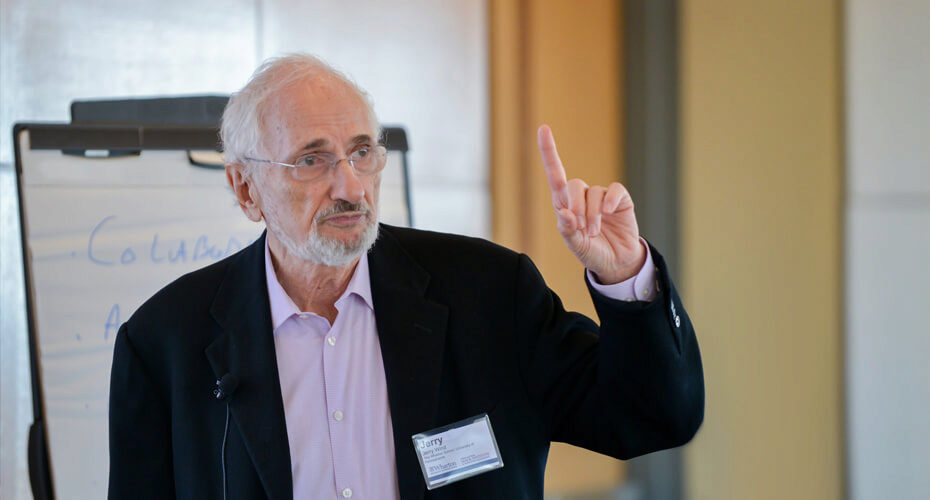 Social media is one of multiple forces of change that are driving smart companies to tweak their business models. Others include:

Warby Parker, a prescription eye glass company that began in the Venture Initiation Program at Wharton, typifies the public benefit model. For every pair of eye glasses sold, the company donates a pair to the needy. TOMS does the same with shoes, and Patagonia, a leader in work-life issues, helps fund environmentally responsible start-ups. 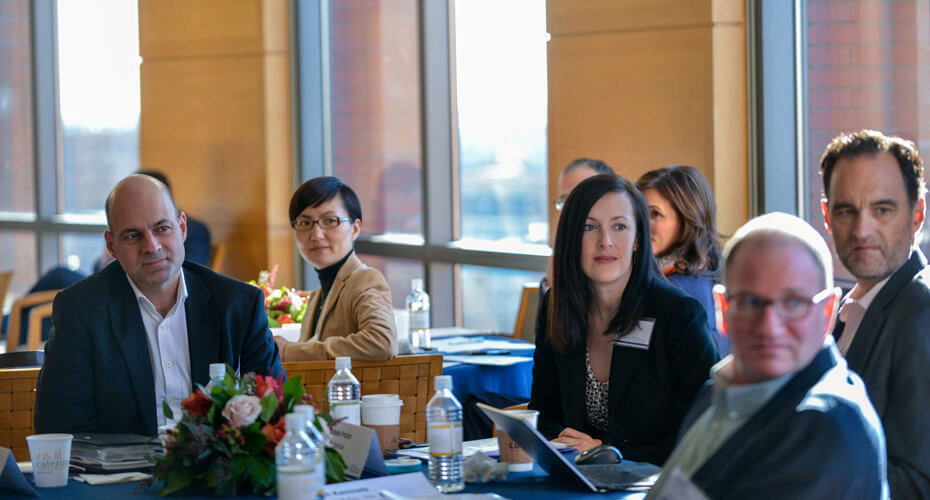 Two contemporary business models worth noting are the co-creation and network orchestration models. The first maximizes consumer input by allowing them to design their own product, as in Dell computers, or in lovable stuffed animals at Build-a-Bear.

The network orchestration model is essential for large manufacturers that opt to source multiple products from around the world to get the best quality and price. A typical Boeing airplane has three million parts from 900 suppliers in 17 countries. A clothing manufacturer might obtain buttons, zippers, fabric, thread and production from several continents to supply retail centers on demand with something as mundane as men’s cargo shorts. Such complex outsourcing demands the ultimate in coordination. 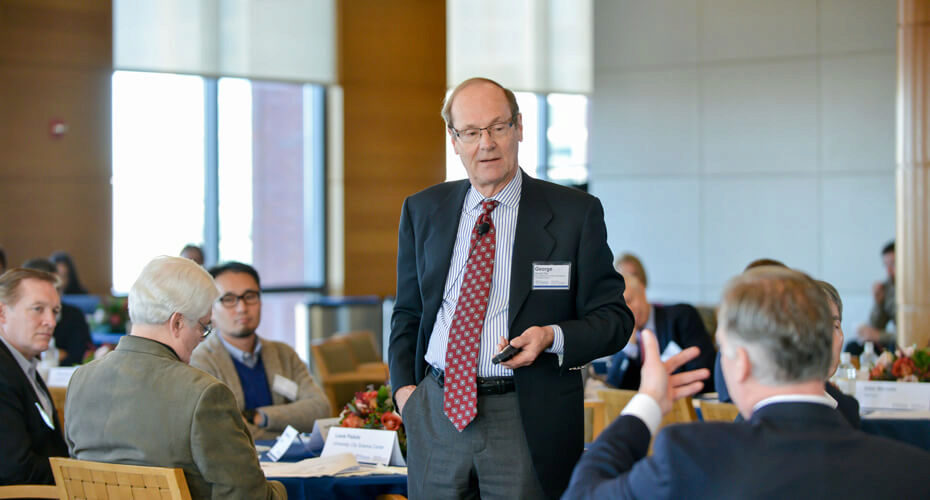 In a post-lunch workshop, Day asked the audience to brainstorm solutions for a disgraced global company that is falling behind its rivals. The company manufactures imaging equipment, such as x-ray, ultrasound, CT, MRI, and molecular scanning machines. Revenue is flat, profits are down, and although its technology is considered as good as the best, the hospitals and doctors’ offices that buy these machines don’t seem to care. What they do care about is the price tag and poor service quality. When guided by deep customer insights the audience was energized.

Adler Merveille, senior consultant of Open Innovation at Verizon, suggested a shift from selling assets to charging consumers per scan or use. The change would be profound because revenues would fluctuate. In addition, the change would require heavy monitoring and data collection. To mitigate the risks, he suggested the company orchestrate a sharing plan among other nearby users. 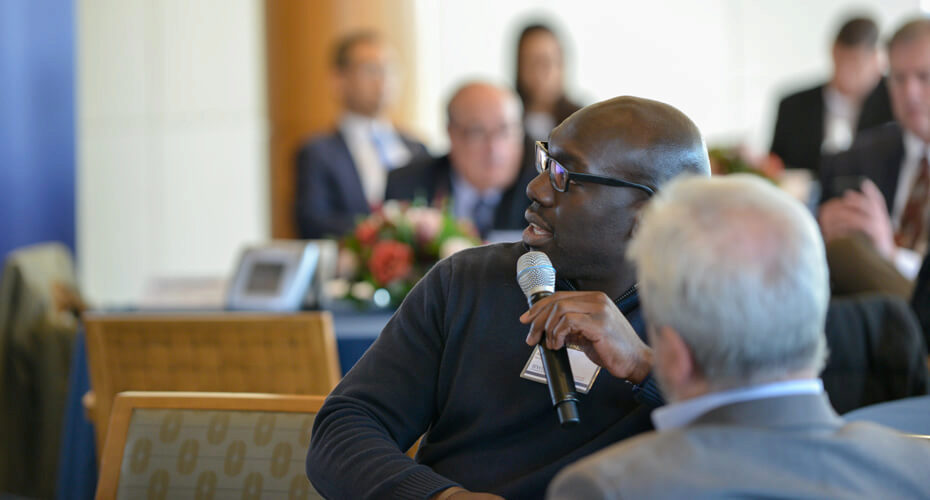 Paying for actual usage is a growing trend, said Day, because it comes closer to meeting the consumers’ needs. It also creates more opportunity for consumers to access the latest equipment or software, rather than continue to use outdated models. For instance, airlines have paid jet engine manufacturers for “power by the hour’ for decades, instead of buying and maintaining the machinery. The usage model replaces the former revenue stream with variable usage fees and long-term service contract sales.

Robert Boland, Directing Senior Manager of External Innovation and Emerging Digital Technologies of Johnson & Johnson, attacked the service side. The company, he said, immediately should put a system in place that would allow broken machines to be fixed within 24 hours. 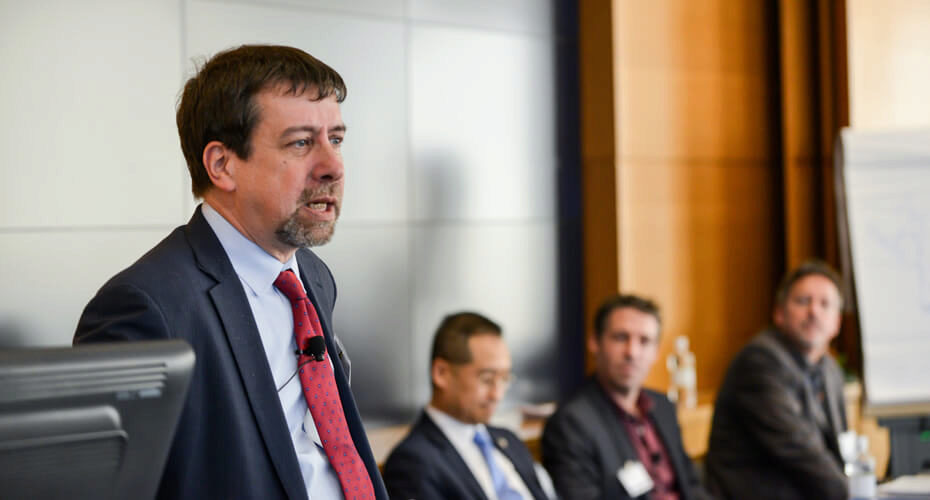 The day-long conference ended with a panel of experts on the future of regulation in the Internet of Things (IoT). That market — from hardware to data-driven action — is expected to reach $1.7 trillion by the year 2020, growing from $656 billion last year. Various personal and household devices and hardware connected to the internet are expected to reach nearly 30 million in the next five years, up from 10 million in 2014.

Moderator Michael Mandel, chief economic strategist for Progressive Policy Institute and an industry senior fellow at the Mack Institute, said Uber is an example of a “very small number of companies that have been able to break the stronghold of regulation that is killing innovation.”

Big Pharma knows precisely what the FDA will and will not approve, so entire fields and methodologies are ignored because they stand little chance of getting out of the gate, said Mandel, a distinguished journalist and former chief economist for BusinessWeek.

Matthew Grennan, assistant professor of Health Care Management at Wharton, said fears about how healthcare-related data could be used or abused is overstated and bogging down experimentation. Any biometric sensor that would seek to predict a condition or replace direct contact with a doctor or pharmacist would raise safety concerns and collide with the “entrenched interests” of the medical profession. 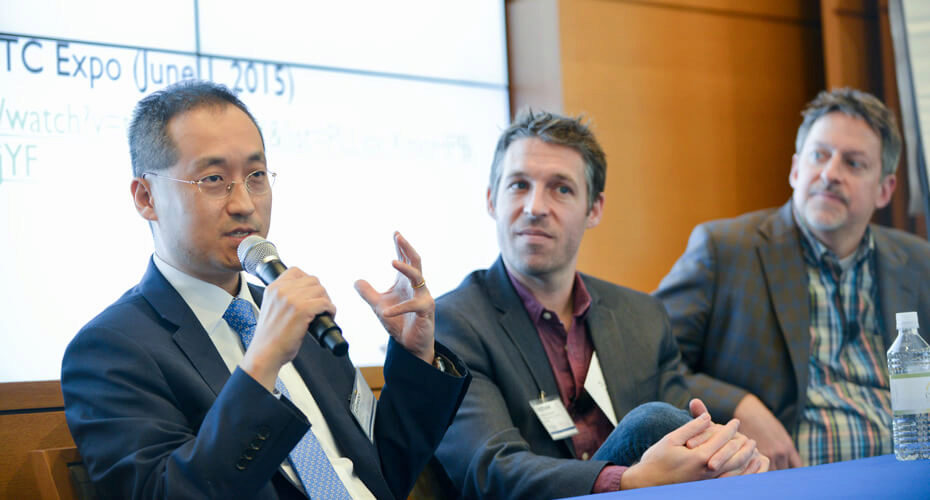 Sokwoo Rhee, associate director of Cyber-Physical Systems Program at the National Institute for Standards and Technology (NIST), said the interconnectivity of the internet has major implications for so-called Smart Cities around the world.

Most cities, regardless of size or continent, share some similar concerns, such as traffic management, green technologies, water resources, microgrids, emergency and disaster response and a host of workforce issues. Rather than study every issue in every city, Rhee hopes to create “replicable, scalable and sustainable” models so that successful deployments in Tel Aviv can be applied to Ammon, Idaho, and vice versa.