Excerpted from “The Blockchain Revolution,” originally published on the Wharton Magazine blog. 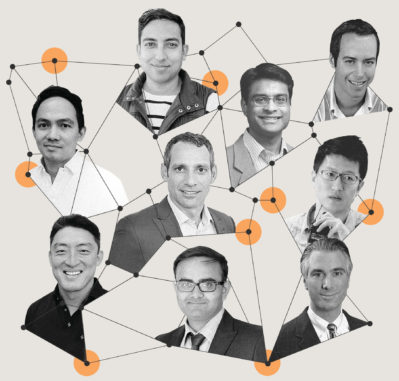 Some of the brightest minds in finance and technology argue that we’re in the early days of what promises to be a paradigm-shifting revolution, one that will impact everything from Airbnb to banking, health care, and real estate.

“Because [blockchain] runs on top of the internet, it’s possible now for something to go from being a small curiosity to a major global phenomenon affecting the world’s biggest companies, and moving hundreds of billions of dollars in assets, in an incredibly short period of time,” says Kevin Werbach, an associate professor of legal studies and business ethics at Wharton.

But revolutions are, by nature, wildly unpredictable affairs, marked by missteps as often as success. The road ahead could be filled with fits and starts as industries gradually figure out how to adapt to new technologies. Or the blockchain-ification of the world could resemble the rise of smartphones, but on steroids—a swift, fundamental shift that will leave people wondering how the world ever got by without it.

* * * * *
Perhaps we should rewind the clock for anyone who just emerged from a Walt Disney-esque cryogenic slumber. Blockchain? Cryptocurrencies? Revolution? How did we get here? It began with a 2008 white paper titled “Bitcoin: A Peer-to-Peer Electronic Cash System” by Satoshi Nakamoto, who filled nine pages with an idea that would turn the world on its head and make some early investors comically wealthy. Nakamoto contended that e-commerce was hindered by an overreliance on financial institutions to play the role of middlemen between merchants and customers, who were increasingly forced to share personal information to verify their identities. “What is needed,” Nakamoto wrote, “is an electronic payment system based on cryptographic proof instead of trust, allowing any two willing parties to transact directly with each other without the need for a trusted third party.”

“If you buy a song on iTunes or anywhere else, it takes a complicated process to get the royalties back to an artist. Any of those transactions can be greatly simplified.” – Saikat Chaudhuri

The underlying technology that would bring this idea to life was the blockchain, a decentralized ledger that permanently records transactions in chronological order across massive public or private networks—in other words, a database controlled by a network of peer-to-peer computers. Blockchain was a brilliant, essentially hack-proof tool that could serve any number of industries; Bitcoin was simply its most prominent early application.

Now, all of these years after Nakamoto introduced the world to the blockchain concept, the potential scope of its power has begun to come into focus. And yet there remains an air of confusion around the technology. “What’s striking to me about the blockchain phenomenon is that it’s simultaneously on the cover of magazines and the subject of huge popular interest around the world, and yet the level of basic understanding is still incredibly small,” says Werbach.

The distributed ledger can be applied to “any situation where you have a collection of actors who don’t fully trust each other but need to share information,” Werbach explains. “That’s most of the finance industry, most of the energy industry, most of government. What we’re seeing now is a flowering of experimentation, which is a really exciting thing. Some of those experiments will take hold and turn into big developments.”

There is some optimism that blockchain could even benefit an industry that’s been largely drowning in the digital era: journalism. In February, Jarrod Dicker, the Washington Post’s vice president of innovation and commercial strategy, left the storied newspaper to become the CEO of Po.et, a blockchain platform he claims will “recalibrate the media business.”

If curing journalism’s financial woes feels like a bridge too far even for blockchain, Saikat Chaudhuri (ENG’97 W’97) offers a more practical use for the technology: Wiring money internationally can be done in the blink of an eye, bringing an end to reliance on the decades-old SWIFT payment network, which takes days to transfer funds. Musicians stand to benefit, too, he argues. “If you buy a song on iTunes or anywhere else, it takes a complicated process to get the royalties back to an artist,” says Chaudhuri, a Wharton adjunct associate professor of management and the executive director of the Mack Institute. “Any of those transactions can be greatly simplified.”

* * * * *
The question of what these technologies—and the world—will look like in 10 or 20 years is being debated fiercely here at the University of Pennsylvania. While Wharton alumni are already writing some of the early history of blockchain and cryptocurrencies, the next generation is closing in behind them fast. Jitin Jain (WG’18) co-founded the Blockchain Club at Penn; about 400 students, with backgrounds in engineering, finance, and law, have joined and taken the beginner and advanced tutorials it offers on all things blockchain. CNBC has already devoted coverage to the club, and Jain and his fellow members had little trouble attracting industry leaders to a conference at Huntsman Hall in the spring.

“Right now, I don’t own my own health-care data. But if it’s on the blockchain, I’ll be the sole owner. If someone wants to use that data, they’ll have to pay me.” – Jitin Jain

“Blockchain is as big as the next internet,” says Jain, who excitedly talks up the impact blockchain can have on the health-care industry. “Right now, I don’t own my own health-care data. But if it’s on the blockchain, I’ll be the sole owner. If someone wants to use that data, they’ll have to pay me. We don’t realize the value of data. It is the gold of this century.”

Asheesh Birla (WG’10) saw firsthand how deep the university’s interest in blockchain ran when he delivered a lecture at Steinberg-Dietrich Hall in January. “I gave a talk there in 2014, and a handful of people came,” he says. “This time, it was standing room only.”

Xiaoning Michael Li (WG’11) had a similar experience in January, when he discussed blockchain at a seminar at the Penn Wharton China Center in Beijing. More than 100 people attended, forcing organizers to switch the gathering to a larger room. “Some of them had experience with blockchain, but the majority had no experience at all. They were quite amazed,” says Li, founder and CEO of CTQuan, a social network for investors in China.

Lost in all of the conversations about disruption and industries being overhauled is the very real possibility for blockchain to have humanitarian value. Jain points out one remarkable example: Last spring, the United Nations began experimenting with using biometric registration data to provide 10,000 Syrian refugees with food at a camp in Jordan. Cash, medical records, and other forms of identity are easily lost when people are forced to dash from their homelands in a panic. Blockchain offered a new way of protecting and keeping track of the identities of the refugees, who purchased food from local supermarkets by undergoing retina scans.

While many outsiders are still learning about the nature of blockchain and its potential, the Wharton community—from students to faculty and alumni—is at the forefront of its growing use in the here and now. For the blockchain believers, its impact is no longer a matter of debate or conjecture. “People should not be asking, ‘What’s the real life application of this technology?’” says Jain. “It’s time for our questions to get more nuanced.”