Fostering an innovation culture sounds great in theory, but what does it take to actually make it work in practice? In this episode of Mastering Innovation on SiriusXM Channel 132, Business Radio Powered by The Wharton School, Safi Bahcall, author of the new book Loonshots: How to Nurture the Crazy Ideas That Win Wars, Cure Diseases, and Transform Industries, explains how to understand and design firms’ structures in order to enable a certain culture.

While attempts to shift a firm’s culture may only effect surface-level change, adjusting its structure is much more practical and can be as simple as re-designing incentive systems. These underlying structures are what drive the patterns of behavior that characterize a firm’s culture. When structures are designed to encourage risk in innovation, firms can incentivize what Bahcall terms “loonshots”: seemingly crazy ideas that are easily dismissed, but actually possess important potential.

Safi Bahcall: When I first started as a CEO, I read everything I could in management literature and the business itself about how to be a better leader or manager and how to build a good company. There was so much about culture, but I was looking for something that had a harder core of science. What I saw over time, through various things that I was involved in, is that people were not talking enough about structure. Here’s what I mean by that. Culture is the pattern of behaviors that you see on the surface. Structure is the incentives, the systems, or the design underneath that drive those patterns of behavior.

By just focusing on culture, you’re just treating the surface and addressing the surface issues. If you don’t understand what’s driving them underneath, you could miss very big opportunities. Fixing culture is very difficult. It’s like pushing a battleship. Adjusting structure, it’s like turning the rudder. It’s much easier.

Harbir Singh: Can you give us examples of turning the rudder and impacting culture in a way that’s positive? I know you have several of them in your book.

Bahcall: Sure. One very common thing is that you reward or compensate people by rank. You’re an associate. If you work hard and do well, you might become a vice president. You do more: a senior vice president. You do better: an executive. Then, maybe someday, you’ll be CEO. But, what that incentivizes is politics. That drives people to stab their neighbors in the back because they’re fighting their way up the same ladder. In doing so, one way you do that is you kill your neighbor’s loonshots, those small crazy ideas that are easily dismissed or ridiculed, but turn out to have a potential to be very important. By compensating people primarily based on rank, you create a political culture that’s hostile for innovation.

“Culture is the pattern of behaviors that you see on the surface. Structure is the incentives, the systems, or the design underneath that drive those patterns of behavior.” – Safi Bahcall

If, on the other hand, you focus the incentives around taking risk and investing in your project, getting to successful outcomes, good risk-taking, or teams uniting around those projects, and you forget about rank, then what you incentivize is an innovative culture. What you see on the surface is political culture versus innovative culture, but underlying that is how you design your incentive systems. One thing we’ve learned in a couple hundred years is that humans respond to incentives.

Singh: Safi, that’s a great point about creating an innovation culture and creating an environment where people are taking risks and not working at odds with each other. Can you give us some examples of great ideas that were never executed?

Bahcall: Well, I’ll give you one that almost got killed because of another maxim that’s out there. You may have heard of “fail fast and pivot.” That is very common, and it really rubs me the wrong way because if you look at the breakthroughs throughout history, they stumbled and failed many times before they succeeded. I’ll give you an example. Do you take a statin drug to lower cholesterol? 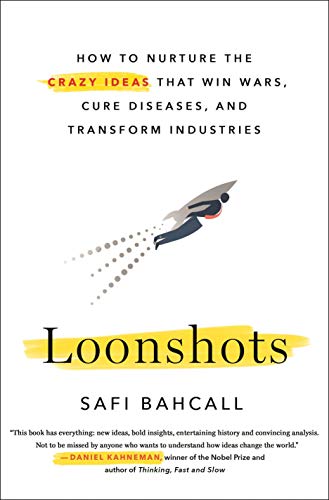 Bahcall: 35 million people in the United States take the statin drug. It’s probably one of the most important medical breakthroughs of the 20th century. It saved millions of lives, but when the scientist that invented it, Akira Endo, was starting on this project, he had some early trials of lowering cholesterol that all failed. Most of the industry said, “You can’t do this, and here’s why. Every cell in your body has cholesterol, so working on a drug that targets cholesterol is absurd. Everybody should stop what they’re doing.” Akira Endo persisted, convincing his superiors that he should go ahead and develop a drug. He got to the stage where he tested in animal models. The models you typically use are beta mice or rats. He tested it and saw nothing. It was good in the lab, but when he tested in the animals: zero. At that point, everybody gives up.

He persisted, and what happened is years later, people understood that the statin drugs only lower bad cholesterol called the LDL cholesterol. As it turns out, rats do not have LDL cholesterol. They only have HDL, the good cholesterol, so the drug had no effect on the rats. If you had been following the mantra of “fail fast and pivot,” you would have been off to the next thing. It’s important to persist through a number of these failures to really spend the time to investigate failure if you want to achieve it.

Singh: I couldn’t agree more. I think that’s a very nice example. Along those lines, the counter to the notion of “fail fast and pivot” is that you only gain expertise by pursuing a particular domain for a long time, even as an individual, so very often you will not actually accumulate the knowledge. That’s part of the problem.

There is one more thing that I want to ask you about. Most organizations cannot tolerate failure even though failure is a part of innovation. How do you reconcile the idea of risk with the idea of delivering performance every quarter in a firm?

“It’s important to persist through a number of these failures to really spend the time to investigate failure if you want to achieve it.” – Safi Bahcall

Bahcall: It starts by recognizing the difference between what I call artists and soldiers. You need to separate the artists and soldiers. The soldiers are the ones who are in manufacturing, in marketing, in product design, or in product delivery. They are the ones who are responsible for getting products on time, on budget, and on spec consistently to customers. You have the artists who are responsible for coming up with the crazy, wacky new ideas.

Those are two very different goals with two very different languages. If you’re a manager or a leader, make it clear in your own mind who you’re talking to and what the objective is. Unless you separate them, you will do exactly what you just said, which is de-risking exactly when you need to be taking risk. For example, that word “risk,” it’s one English word. It should have one meaning, but it doesn’t. To a soldier, risk is a bad thing. If you are assembling, preparing for battle, you want the least amount of risk possible. If a general says to a soldier, “You really de-risked this plan,” that’s a huge compliment. Now, if a leader says to an artist, “You really have no risk in your art,” that’s an incredible insult. The same English word, “risk,” has four letters, but means two completely different things.

Safi Bahcall is a second-generation physicist and a biotech entrepreneur. He received his BA summa cum laude from Harvard and his PhD in physics from Stanford, where he worked with Lenny Susskind in particle physics and the Nobel laureate Bob Laughlin in condensed matter physics. He was a Miller Fellow in physics at UC Berkeley. After working for three years as a consultant for McKinsey, Safi co-founded a biotechnology company developing new drugs for cancer. He led its IPO and served as its CEO for 13 years. In 2011, he worked with President Obama’s consul for science advisers in the future of national research.

2 comments on “How to Nurture ‘Loonshots:’ Change a Firm’s Culture by Addressing Its Structure”