It’s one thing to have an innovative idea — and another to have the resources and the team necessary to make it work. In this episode of Mastering Innovation on SiriusXM Channel 132, Business Radio Powered by The Wharton School, co-authors Curtis Lefrandt and Nathan Furr talked about their new book, Innovation Capital: How to Compete–and Win–Like the World’s Most Innovative Leaders. To write it, they examined research on human capital, social capital, and reputation capital. They also interviewed successful leaders including Jeff Bezos and Marc Benioff.

The authors define “innovation capital,” Lefrandt said, as “who you are as an individual when it comes to innovation, who you know, so your innovation-specific social capital, and then what you’re known for, your innovation-specific reputation capital.” With this capital, creative innovators can secure investors and hire teams to help them execute their vision. Lefrandt and Furr offered advice on leading in disrupting spaces, shared what Elon Musk does well, and explained how you can amplify your own innovation capital.

Nathan Furr: I think the big aha for us was interviewing Marc Benioff, who is the CEO and founder of Salesforce.com. We were talking to him — and Salesforce.com is consistently at the top of our list of the world’s most innovative companies that we publish with Forbes. And Marc Benioff is the founder. Nobody has more sway and influence over Salesforce than him.

And yet he sat down in this interview and he said, “You know? I’ve spent the last 17 years building up my capacity to do new things and change this organization. It’s like political capital but it’s not. It’s almost like you could call it ‘innovation capital.'” That realization that, in all the work we were doing on innovation, we were really missing this more integrated perspective on how you win the resources and support to do new ideas.

“In all the work we were doing on innovation, we were really missing this more integrated perspective on how you win the resources and support to do new ideas.” – Nathan Furr

There’s some good, empirical support for this in fact, that leaders with a certain vision actually attract people in the very selection period of hiring people and bringing them onto their team that help them achieve that vision. So we do introduce this complementary idea of this virtuous innovation leadership cycle.

Siggelkow: What is the innovation-specific aspect of your work? What makes it particularly germane to innovation leadership? 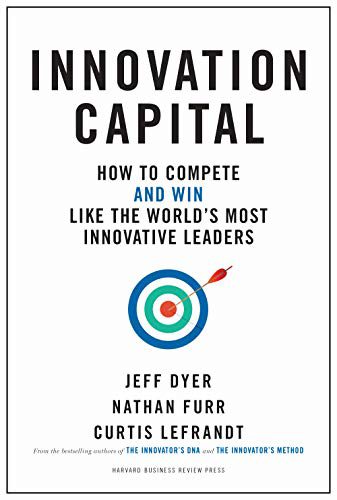 Lefrandt: That’s a great question. I think there are elements of what we teach in the book that can be applied to leadership in general. I think the innovation-specific moniker and tag really comes into play because we are trying to use these concepts to tackle game-changing concepts. If you think about the individuals that we’ve studied for this, their life’s work has really been about disrupting the industries that they play in.

So if you look at Elon Musk and his incredible ability to generate capital, to encourage people to join his cause, it’s because he has these big, lofty goals to create interplanetary transportation, or to disrupt the automotive industry. And so he is deploying these tools and these tactics of impression amplifiers or innovation capital because these are inherently very risky and tough, oftentimes intractable, problems that they’re facing. And I think that is really where the innovation element comes into play.

Siggelkow: Talk us through a little bit about what you just mentioned, impression amplifiers. Because you started out by saying, “OK. It’s important who you are, who you know, what’s your reputation.” But quite often there is this issue that you raise nicely in the book of, “Well, other people need to know about that.”

And so, you’re talking about three different personal impression amplifiers: broadcasting, signaling, and storytelling. So maybe you can tell us a little bit more about those.

Lefrandt: Sure, absolutely. The basic notion of impression amplifiers is that we all have existing human social and reputation capital, but we can actually amplify the relationships that we have or the reputation that we’ve built and we can do that by using these impression amplifiers. So, as you just noted, Nicolaj, we have a number of different very tactical tools in the book that we introduce, like broadcasting, signaling, storytelling, materializing.

For example, Elon Musk is a master at this and he uses a number of these different tools if you think about his product launches, as he is introducing new concepts. One of our favorite examples of materializing comes from The Boring Company, Elon’s latest initiatives to build an entire underground transportation infrastructure in highly dense urban environments. And I think, for a lot of folks, putting forward a radical idea like that would fall flat or it wouldn’t capture people’s imagination in the same way space exploration might or electric vehicles might.

And so, Elon did a number of things to bring that concept to life through materializing it. He has this incredible video, a 3D video that he had a Tesla engineer put together, that depicts what a boring infrastructure might look like. It’s exciting. It’s compelling. And that helps people get behind his cause and his concept.

“Elon Musk is a master at this and he uses a number of these different tools if you think about his product launches, as he is introducing new concepts.” – Curtis Lefrandt

Siggelkow: That was one of the idea impression amplifiers, as you call them. Materializing, making it very concrete. It probably links to storytelling.

Nathan, maybe you can tell us a bit more about the personal impression amplifiers. Because if it is now about personal leadership and telling your own story about yourself, what are some things that you’ve learned in your research. What works really well?

Furr: Yeah, it’s great. You know, Nicolaj, if I could, I just want to take the chance to highlight that these aren’t things that we just made up out of the blue. There are some pretty serious research foundations to the four sources of innovation capital that we discuss in the book. Because what we really did is, drew on three sources of research. We went back to the academic literature and there’s actually separate academic literatures on human capital, social capital, reputation capital. And then the impression amplifiers come from the work on impression management and symbolic management.

These were all great fields. They just hadn’t been connected. And so we’re really drawing in that and then we’re complementing that with our interviews with these superstar innovators. And then maybe the more representative interviews like you and me, who, we’re not the Elon Musks of the world.

So the idea that impression amplifiers that are personal are more about your impression management and what are some of the things you can do. So there’s a couple of them. One of my favorites is probably broadcasting and broadcasting your idea, broadcasting who you are, showing commitment, creating, being able to tell stories about what you’re doing.

Curtis Lefrandt is the CEO and co-founder of the Innovator’s DNA. He has worked with some of the world’s largest organizations to develop an innovation culture and capability, including United Technology Corporation, Fortive, Cisco, Johnson & Johnson, Caterpillar, and Medtronic. Lefrandt oversees the strategic direction and operations of Innovator’s DNA’s training, products, and services.

Nathan Furr is an assistant professor of strategy at INSEAD, where he teaches innovation and technology strategy. Furr earned his PhD from the Stanford Technology Ventures Program at Stanford University and holds BA, MA and MBA degrees from Brigham Young University. He has held permanent or visiting positions at INSEAD, ESSEC, and BYU.