After founding a company whose purpose is to “ignite growth revolutions,” David Kidder says he realized that a company’s potential has everything to do with the “interior life” of its leader. In this episode of Mastering Innovation on SiriusXM Channel 132, Business Radio Powered by The Wharton School, the CEO and co-founder of Bionic explains how his company works with large enterprises to foster entrepreneurship and install a venture capital-style operating system.

Kidder, author of the new book New to Big as well as The Startup Playbook, also talked about what he’s learned from launching three SaaS (software as a service) companies in the last 25 years, why businesses need to focus on permanence — “How do I put in the hooks and barbs in my customers so they can never leave?” — how to judge “productive” failure, and more.

David Kidder: In the same way, we have some of the best business schools in the world teaching administration as a skill — a masters of business administration — that really focuses on the “big to bigger.” Whereas venture capital and entrepreneurship are forms of discovery and growth. And that’s a completely opposite skill. I’ll give an example of this. About 60% to 70% of all returns, in growth, come from 4% to 6% of capital deployed, which is to say, if you make a 60/70 bet, about 90%, 95% of them are going to go to zero or they’re going to return your cash.

One, the failure teaches us about the four to six that work. And if you look at how you originally made the decision, those companies that made all the returns, they have two qualities. The first quality is they were a “discovered secret,” something you found about how you could solve a problem that was happening in the world today. And number two is, the decisions were made in a non-consensus vote. This means you make all of your money from the ideas with the highest disagreement rate as it relates to growth because it’s fundamentally new to you and new to the world. Conversely, if you’re making decisions about growth as if you were planning for it, i.e. consensus, you’re basically in big trouble. You need a new model. That’s what our model does is, it installs a new operating system that is designed for growth that uses the model of venture capital to operationalize a day-to-day way to manage these investments, that changes the mindset mechanics in how we invest through the stages of the venture.

“Often when I do my keynotes, the CEO of the company will come to me and say, ‘I don’t think my company tells me the truth.'” – David Kidder

It also builds an army of entrepreneurs. We have entrepreneurs as a permanent career inside these large organizations. Rather than leading into something new, they stay, and they capture the future. The last piece is the organization has to go fast. So how do we build a capability that imbues speed? The only way to go faster is to do less work. So what gears are we going to rip out and how are we going to incentivize the change? We’ve been doing this at scale now for the last six years with some of the largest organizations in the world with some of the biggest CEOs and it’s led to a dramatic mindset and mechanics shift that has led to growth.

Harbir Singh: David, that’s really fascinating. I was just wondering about companies like Amazon, which have continued to grow and innovate even when they’ve become very big but are still of course a young company. How would you think about Amazon’s growth operating system?

Kidder: The central job of a CEO is permission, where it relates to growth. I wrote the purpose of Bionic, six years ago, to read that “we ignite growth revolutions.” When I wrote it years ago, I thought about it in the context of the revenue, or startups, or metrics around it. But what I realized is that it’s actually about the interior life of the leader. In a way, they are the ceiling, they are the limit to what a company is capable of doing and its possibility. When you have a CEO who, as he calls it, leads a day one mindset, right, he’s written about this for 20 years. You’re probably very familiar with his day one, day two, day three stages of growth, right? 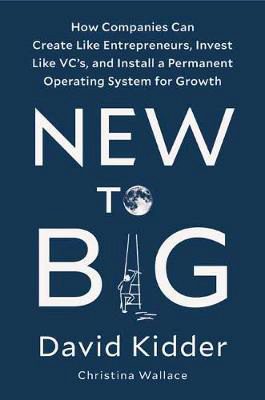 Kidder: Our job in a way is to re-found these companies back to a model that creates learning velocity, and the permission to fail. If you can only sell a dream, you can never un-sell in a large company, you are forecasting into the unknowable. The company fundamentally doesn’t have the ability to discover the future because it doesn’t have a model to actually manage the unknowable and its permission to take that risk doesn’t exist. Bezos, his giftedness, is setting up an organization that does that every single day in its genetics, in its process, and its permissions that drives to new commercial truths.

Singh: I’m just thinking, you talked about how HR departments need to change how they think about human capital, and one of your pillars is “it must be safe to try,” right, on page 148 of your book. The thing is that you have to do an assessment of five people working in your unit, and one of them just failed three times in the last five years. Another one failed twice. In other words, what’s a good failure? What’s not a good failure?

Kidder: I think there are a couple qualities to productive failure. One is that it was done inexpensively. You got to a truth on a cost basis that was much, much less than say the planning model, which makes predictions and then tries to make them true. The cost base of the learning is really important. Secondly is that the person who’s delivering that productive failure is actually telling the commercial truth. Often when I do my keynotes, the CEO of the company will come to me and say, “I don’t think my company tells me the truth.” And my response to this is, “Because it doesn’t, because your cost of failure is too high.” You have these amazing people who want this company to be successful, but the organization is largely intellectually dishonest. Because they do too few things and they are so expensive, they must work.

As a result of this, you have these zombie ideas, these zombie companies, these zombie programs that literally won’t die because there are people who are trying to make their ideas work. Here’s a rule of investing: You never invest in an entrepreneur who loves their idea, ever, because they have no elasticity or permission to change it. You want to invest in entrepreneurs who are obsessed with the customer problem, with total permission to solve it, even if it means letting go of truths about yourself or your product that are no longer true. I think that, coming full circle, you need to have the mindset and mechanics and the permission inside the leader and the organization so that people are in a position to actually lower the cost of failure and, as well, they can tell you the truth.

David Kidder is an entrepreneur and an angel investor in over 30 companies. He is the co-founder and CEO of Bionic. Previously, Kidder served as the co-founder and CEO of Clickable, and co-founded SmartRay Network. A graduate of the Rochester Institute of Technology, he received Ernst and Young’s Entrepreneur of the Year Award in 2008. He is the creator and co-author of the New York Times bestselling series The Intellectual Devotional and The Startup Playbook. He lives in Westchester County, New York, with his wife and three sons. You can find more on Twitter @davidskidder.