As pharmaceuticals move beyond big blockbuster drugs in pursuit of ever more specialized therapies, the biomedical industry has had to evolve. In this episode of Mastering Innovation on Sirius XM Channel 132, Business Radio Powered by The Wharton School, guests Lawton R. Burns, Mark Pauly, and Philip Rea, co-authors of Managing Discovery in the Life Sciences: Harnessing Creativity to Drive Biomedical Innovation, discuss the key players that bring successful biomedical innovations to the patients who need them.

Burns, Pauly, and Rea represent a variety of backgrounds in economics, health care, and life sciences. As the ecosystem of biomedical innovation expands beyond traditional players, such diversity is increasingly necessary. The authors analyzed case studies of major advances like precision cancer therapy, noting important mavericks who took immense risks for the innovations they believed in. A large success factor in these case studies, however, proved to be the element of serendipity. Unexpected results would push innovators to consider new questions and experiments, which have led to many of the major innovations we see today.

Lawton R. Burns: What’s happening now in biopharma R&D is that universities and research institutes are playing a much bigger role. That’s because we’re having more of a distributed R&D model/open innovation model. A lot of the basic science and some of the applied science is being done in the universities. Penn is an obvious example. We have two new products coming out of here and forming spinoff companies. Increasingly, you can’t rely on the pharmaceutical industry itself, and [those in the industry] know this. They’re trying to increase their reach into the universities, their alliances with universities. We had a huge alliance with Novartis. That’s the model going forward. These nonprofit actors like universities and research institutes will play an increasingly bigger role.

Philip Rea: I’d endorse that. I’ll go still further, and I would say that the period of the small molecule is petering out – by and large, not entirely. We have the Gleevec story, which is a marvelous example of a small molecule that’s been of incredible therapeutic impact for CML (chronic myeloid leukemia), but we’re going more down the sophisticated molecular cellular route. As a result of that, it’s the sharpened fundamental research that’s spawning new innovation to a much greater extent than it did in previous years. So, the necessity of entities — universities, NIH, Gates Foundation, etc. — is ever more prominent. There’s a need for investigators that almost exclusively focus on addressing fundamental, basic science issues, and out of those, spin some fundamental therapeutics without necessarily having the goal of developing a therapeutic in mind. A major play in the book is serendipity, and that is getting answers to questions that we never posed, but answers that turn out to be of incredible therapeutic value.

“A major play in the book is serendipity, and that is getting answers to questions that we never posed, but answers that turn out to be of incredible therapeutic value.” – Philip Rea

Harbir Singh: Tell us more about serendipity and innovation. One of the interesting things is, companies spend a lot of money on R&D. They have big teams, labs, and research programs. You actually talk about the unintended, the branches that people never thought about, and that those actually worked. One question is the role of serendipity. The other one is: can you actually manage innovation?

Burns: The serendipity part, first. You’re doing experiments, you have a hypothesis in mind, you’re looking for some expected findings, and then, they don’t turn out. The question is, what happens then? What we found in these case studies is that part of the serendipity is just recognizing that there was some serendipity. They say, “Oh, those were some unusual findings which I didn’t expect. What do those mean?” Then, they pursue a new line of inquiry or investigation, which leads to some really fundamental discoveries. 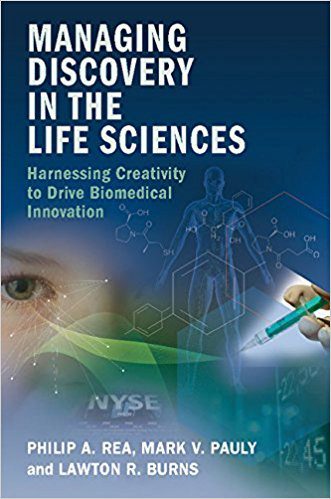 The other thing I’d mention about managing innovation is that it gives credence to the things that academics always say to their deans in their presence: “We need more time. We need more research funding. We need more students.” There’s something to be said for having a lot of what we call corporate slack to finance, open investigation, and open inquiry into things. That’s what we see in a number of these case studies. They weren’t necessarily richly funded, but they required time. They required the cooperation and collaboration with investigators all over the world. It required money. Oftentimes, that’s what it takes to pull these things off. It’s not something you can engineer and just do top-down. A lot of the stuff is bottom-up: individual investigators driven by a passion, driven by curiosity. With a hypothesis, it’s unusual in pursuing it, even in the face of doubting Thomases.

Rea: Something that’s really relevant, too, is the Life Science and Management program itself, which essentially is the brainchild of Roy Vagelos, who is a chemist who also became the CEO and President of Merck. The objective of the LSM program is to put people in positions of responsibility — with respect to the allocation and distribution of resources — who have a sufficiently nuanced understanding of the science to identify a nascent proposition in the scientific sector without losing its potential significance in translation.

A major play into that in several chapters in the book is an appreciation that some of the best leadership — when creativity is the key determinant, not productivity — often comes from individuals that have a very, very deep understanding of science. They came out of science themselves, and then, they acquitted themselves with the requisite skills in order to administer science, if you will, and make calls on which projects to carry forward, which ones may be our long-term objective projects, and which projects are maybe shorter term, but could provide funds to support longer-term projects.

Mark Pauly: Discovery has moved toward what’s called rational drug discovery, but one of the messages that we convey in the book is that, although it’s called rational drug discovery, there’s a lot of irrationality and serendipity. The plot for almost all of our drugs is like a Disney movie, where, when everybody’s really happy and things are going great, you know five minutes later, something terrible is going to happen. The dogs will get tumors (as in the case of the statins), or the method won’t work, or sometimes even the market will lose interest in your particular product or fail to carry it through. That was true of one of the diabetes drugs that we looked at. That’s what we concluded. Rob mentioned we can come up with some necessary conditions for drug discovery. We know how to kill it, but sufficient conditions to make it happen for sure — that still remains to be determined.

Rea: The other thing I’d add to that, and it’s slightly tangential, is stratification of disease to the point of orphanization. In the advent of the human genome project and broad range genomic characterization on a very personal and one-on-one level, the development of forms of intervention will become a lot more strategic. It has already shown indications of that effect. What that means is that the sample population that will be registered for drug trials will be one for which the probability of a beneficial effect is significantly greater than it was, say, in the early days of the statins and the antihypertensives, where you were really dealing with individuals with cardiovascular disease as an aggregate.

The more we come to understand of lipidology and cardiovascular disease, the more we come to appreciate the degree to which that disease is stratified and that there are certain forms of intervention with a very high probability of working, but others with a very low probability of working. The model is going to transition a little bit away from the blockbuster model where you can bring benefit to literally hundreds of thousands if not millions of people to a model bringing benefits to smaller groups of individuals, bringing benefits to those individuals with less off-target effects, to individuals that do not get benefit from those therapeutics.

Pauly: The economics of that personalized or precision medicine is interesting, too, and a little bit frustrating because a lot of products don’t work for everybody. If you give a product to the population of people at risk for the condition, it only works for some. Let’s say it works 1 time out of 10. That means you can’t charge a very high price for it, because 9 times out of 10, it won’t work. Now, suppose there’s a companion diagnostic: the genetic marker that tells you who the 1 in 10 is it will work for. The result ought to be that you could charge a 10 times higher price because it’s 10 times more likely to work than the previous incarnation. That is why nobody likes to sit next to economists at dinner parties because we always have bad news to go along with the good news. The good news is, it’s a great thing not to take a drug that can have quite severe side effects if it’s not going work for you, but the bad news is, somebody may actually have to end up paying more for that drug.

Dr. Burns has analyzed physician-hospital integration over the past 25 years. In recognition of this research, Dr. Burns was named the Edwin L. Crosby Memorial Fellow by the Hospital Research and Educational Trust in 1992. Dr. Burns has also published several papers on hospital systems and physician group practices. The last 13 years he spent studying the healthcare supply chain. He completed a book on supply chain management in the healthcare industry, The Health Care Value Chain (Jossey-Bass, 2002), and a recent analysis of alliances between imaging equipment makers and hospital systems.

Mark V. Pauly is Bendheim Professor in the Department of Health Care Management, Professor of Health Care Management, and Business and Public Policy at The Wharton School and Professor of Economics in the School of Arts and Sciences at the University of Pennsylvania. A former commissioner on the Physician Payment Review Commission, Dr. Pauly has been a consultant to the Congressional Budget Office, the Office of the Secretary of the U.S. Department of Health and Human Services, and served on the Medicare Technical Advisory Panel. He is Co-editor-in-chief of the International Journal of Health Care Finance and Economics and Co-editor of the recently published Handbook of Health Economics, Volume 2. Dr. Pauly has been elected President of the American Society of Health Economists this year. He is the 2012 winner of the William B. Graham Prize for Health Services Research and the 2012 recipient of the University of Pennsylvania Provost’s Award for Distinguished Ph.D. Teaching and Mentoring.

Philip A. Rea is a Professor of Biology in the Department of Biology in the School of Arts and Sciences, and Rebecka and Arie Belldegrun Distinguished Director of the Life Sciences and Management Program at the University of Pennsylvania. Together with Dr. Mark Pauly, he founded the Roy and Diana Vagelos Life Sciences and Management Program in 2005, which he continues to co-direct. Dr. Rea received his D.Phil. in Plant Biochemistry from the Department of Plant Sciences and Magdalen College, University of Oxford, UK. Shortly before joining Penn’s faculty, he was a Group Leader in the Department of Biochemistry, Rothamsted Research (formerly known as the Institute of Arable Crops Research), one of the oldest agricultural research institutions in the world.

Dr. Rea’s primary research has been directed toward understanding a broad range of transport and related phenomena with special emphasis on alternate energy sources and cellular detoxification processes. He and his group have made major contributions toward understanding a remarkably broad range of biological transport and related phenomena through their foundational investigations of vacuolar proton pumps, plant and yeast ATP-binding cassette (ABC) transporters and the enzymological basis of heavy metal detoxification.