An organization’s search for talent and an employee’s search for a job are not always aligned, so how does an organization recruit the best people for its needs? In this episode of Mastering Innovation on Sirius XM Channel 132, Business Radio Powered by The Wharton School, guest Dennis Carey, co-author of Talent Wins: The New Playbook for Putting People First, discussed what putting people first looks like and the benefits organization can derive from it.

Carey delved into some of the emerging methods of employee recruitment, including online competitions and artificial intelligence assessments. Above all else, he highlighted the need for companies to invest in their people, valuing human capital just as strongly as financial or managerial capital. Carey introduced his own definition of TSR: talent, strategy, and risk. This framework emphasizes how people are the most important element in any function. As a result, upper management within human resources needs to be as integrated into the C-suite as any other key role.

Harbir Singh: What does it mean, putting people first? You talk about how companies focus a lot on money, and they don’t focus as much on talent as they should.

Dennis Carey: That’s the basic premise. If you think about it, Harbir, I like to – even when I’m teaching here at Wharton – talk about TSR, which most people associate with “total shareholder return.” I switched the words around a bit to mean talent, strategy, and risk.

A new definition for TSR: talent comes first. People obviously come before strategy. Strategy is really a function of capital allocation and financial allocation, where you’re placing your bets by the CEO. Fundamentally, most boards talk a lot about strategy. They conduct a lot of financial audits and have a lot of discussions about where they place their bets, but rarely is that connected to the most important dynamic, and that is the human capital side.

“We’ve effectively argued that human capital should be put at the same level as financial capital.” – Dennis Carey

We’ve effectively argued that human capital should be put at the same level as financial capital. When you think about it in today’s environment, CFOs are making a lot more money than HR chiefs. We’ve heard the argument for many years that HR should really have a seat at the table strategically. By the way, I think about 14 or 15 of the Fortune 100 CEOs are former finance chiefs and only one is an HR chief. The basic premise here is that HR should be elevated. People really do drive the money, and you only have money and people in a company.

You’ve got money, and you’ve got people, and that’s it. Too much focus on the finance, too little focus on human capital. We’ve even made the argument, which is now starting to resonate with a lot of the boards I work with, that the comp committee should effectively be the talent committee. We even advocated a change in the name from “compensation” to “talent and rewards.” We want to have the comp committee shift gears and start focusing on not only CEO succession issues, which is typically the purview of a board, but also who’s going to replace the CFO, or the HR chief, or just as important: the key drivers of value in a company, which are buried beneath the table of organization. 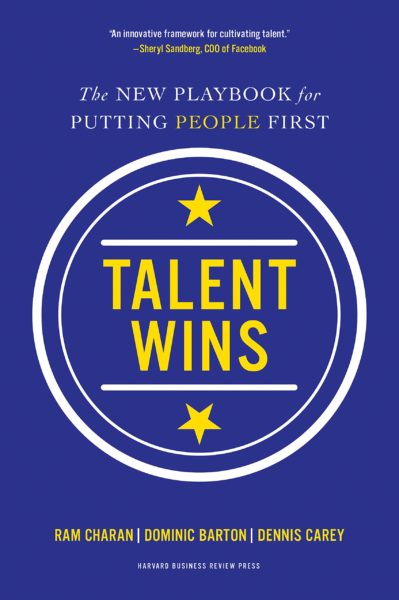 Singh: I couldn’t agree with you more. As you point out in the book as well, there are companies that are looking for talent, and there are people looking for jobs. They don’t always connect. Very often, employees are disaffected in their existing job, so the issue of motivation is central. That, again, relates to actually managing talent and motivating people. One thing I really was struck by in the book was the idea of the critical 2%.

Carey: Yes, I’m glad you brought that up, Harbir, because we certainly did not want to be necessarily associated with a political argument – you know, the Bernie Sanders 1%. It could be 2%, it could be 1%, or it could be 3%, What we were driving at is: who are the people within the organization who truly create the value of the enterprise? Often, those people are not necessarily in the top of the hierarchy.

“Who are the people who truly create the value of the enterprise? Often, those people are not necessarily in the top of the hierarchy.” – Dennis Carey

We went around talking to CEOs to identify the 15, 20, maybe 50 people in the organization that they simply cannot live without, or if they do lose them, they would be severely impacted. It might be the head of purchasing. In the case of Blackstone, Sandy Ogg did this assessment and determined that the head of purchasing was delivering more value than most other players even at the top of the house in one of the portfolio companies.

One of the first orders of business – and this is part of the playbook for putting people first – is to identify who these real value creators are. Amazingly, it’s a small number of people. Even more amazing is that if you ask the CEO, CFO, and HR chief independently, you get different answers for different reasons. Often times, the board has no idea who those top 20-40 people are who are driving the most value, and you need to protect them.

Singh: How does the environment that companies operate in today affect this whole issue of identifying and developing talent? We see a lot of restructuring. I read this rhetoric all the time, that we need to trim some jobs. It’s almost like it’s a headcount. It’s just purely counting people. You’re talking about a much greater attention to human capital. Why have people missed this?

Carey: That’s a really interesting question. I remember when I was doing my doctoral studies, almost eons ago at this point, books, academics, and some actual CEO leaders were talking about the need to flatten the hierarchy, to engage across the board, and to create team-oriented activities. Very few companies paid attention, and most all companies, even today, are very hierarchical. Most of the HR functions are what I would call administerial. They’re not strategic in nature. If you asked the average HR chief today to complete the CFO’s sentence, sometimes, they have trouble. But also, if you ask the CFO to complete the HR sentence, they have trouble, too. That’s the reason we have crafted in this book a basic proposition that companies should create a G3, which is essentially the CEO, the CFO, and the HR chief singing from the same hymn sheet, creating squads of people within the organization to attack issues of innovation, productivity, performance, and competitiveness.

“Companies should create a G3, which is essentially the CEO, the CFO, and the HR chief singing from the same hymn sheet.” – Dennis Carey

When you combine product people with geographic focus, combine that with finance people and HR people, and bring them all together into small teams, much like what we’ve seen in Silicon Valley, you see almost immediate return on the investment. Why? It’s a little like the Hawthorne effect. You get people feeling excited about what they’re doing. Whether the lights are going up or down, they feel like they’re being paid attention to, regardless of their structure, the positioning within the hierarchy, and the chain of command.

You’re flattening the organization. You’re engaging people more. You see much more passion, much more commitment to the company and its strategy. On that note, Harbir, one thing that’s fascinated me for a very long time is, when you interview people across the organization, how few can articulate the strategy of the enterprise, even in the boardroom, and how few development programs are designed to address the issue of making sure that everyone knows what the strategic imperatives of the enterprise are, which is fundamental. Once you connect those dots, what we’re seeing is heightened levels of productivity and engagement.

Dennis Carey, PhD is a Vice Chairman of Korn Ferry, where he recruits board directors, CEOs, and their direct reports. He has placed and assessed some of the most successful CEOs and directors for over 75 leading companies in the Fortune 500. He founded several forums for chairmen, CEOs and C-suite executives including The Prium, the CEO Academy, and Academies for CFOs and CHROs of Americas best-managed enterprises. He has published four books and over 50 refereed journal articles. His most recent book, Boards That Lead, coauthored with Ram Charan and Mike Useem, was cited as book of the year by Directors & Boards Magazine. Carey also teaches corporate governance at the Wharton School of the University of Pennsylvania. He has served on both public and private technology boards.