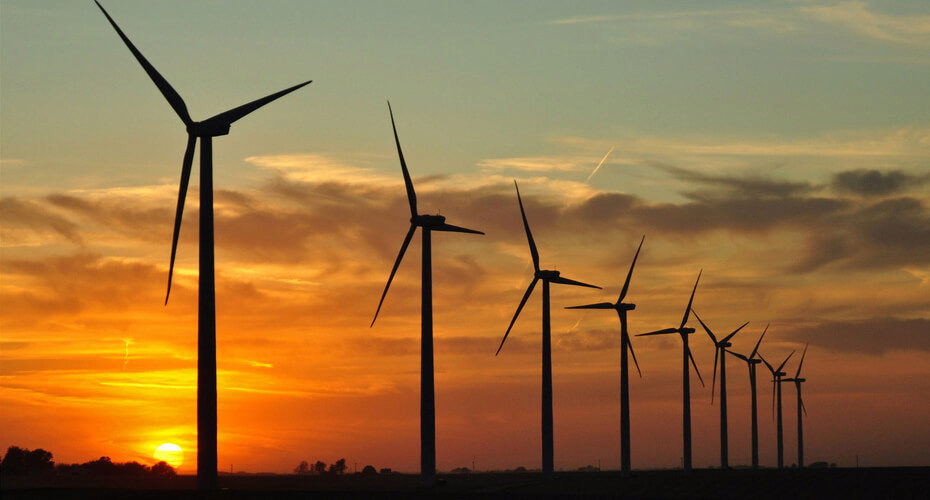 Earth’s climate appears increasingly likely to warm beyond the 2 degrees Celsius that many scientists view as the threshold to severe environmental impacts. Efforts to reduce carbon emissions, most notably under the Paris Climate Agreement, may slow the warming process, but are unlikely to stop it.

A more aggressive approach to energy innovation is needed to combat climate change, and a Penn graduate might have part of the answer. Dr. Daniel Sanchez, a visiting scholar at Penn’s Kleinman Center for Energy Policy, recently presented a new strategy at an event co-hosted by the Mack Institute. He offered a plan to commercialize carbon-negative energy systems that would remove gigatons of carbon dioxide from the atmosphere even as they provide electricity to homes and industry.

Sanchez is a postdoctoral research scientist at the Carnegie Institution for Science at Stanford University, and a 2010 Penn graduate in chemical and biomolecular engineering. His research focuses on the interplay of technological innovation, economics, and policy. He believes these three disciplines must work in concert to accelerate the large scale adoption of low-carbon energy systems.

“We need to close the gap between where science suggests we should be and where we as a society are going,” Sanchez says. As energy, policy, and climate are increasingly mentioned in a single breath, Sanchez’s multidisciplinary approach to reducing emissions has become increasingly vital.

Borrowing Technology from the Coal Industry

At its root, the carbon-negative strategy would rely on carbon capture and storage (CCS), which has been under development to remove carbon from the emissions of coal- and natural gas-fired power plants. But Sanchez’s plan looks to biomass, rather than fossil fuels, as the source of energy.

By using corn stover, switchgrass, or other non-food crops as fuel for electricity generation, and then capturing and burying the carbon from the fuels after they’re burned, nature’s own carbon cycle is interrupted.

Normally these crops fix carbon from the atmosphere through photosynthesis, and re-release carbon when they decompose. But by sequestering the carbon in underground reservoirs the process becomes carbon negative. Scenarios put forward by the Intergovernmental Panel for Climate Change envision global deployment of bioenergy with CCS at scales of about 30% of current worldwide emissions per year, or about 10 gigatons of CO2.

Focus on Bringing Solutions to Market

Sanchez recognized the cost and complexity involved in transforming the energy system as an undergraduate at Penn. His next step was to pursue a Master’s and Ph.D. in Energy and Resources at UC Berkeley, where he focused on moving technologies from the lab to the market. 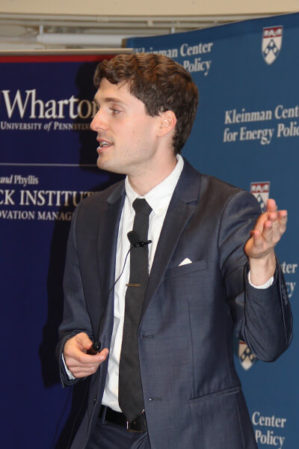 “Engineering is one part of the challenge; there’s economics and policy too.”

He says that necessary engineering advances can be made, but they’ll require budgetary commitment to research and development from government and from private industry and investors.

The likelihood that the money will come is “predicated on the idea that we take climate change seriously,” Sanchez said during his presentation to students and faculty at the Kleinman Center. “Capricious funding that ramps up and down quickly can stall the pace of technology innovation.”

Sanchez has reason for hope. At the Paris Climate Summit in December 2015 a group of 20 countries, including the United States, agreed to double government investment in clean energy funding to $32 billion per year by the early 2020s. The agreement was named Mission Innovation, and has since expanded to 23 countries.

However, given the unpredictability of any one government’s support for clean energy R&D, Sanchez believes that Mission Innovation, which currently garners most support from the U.S. Department of Energy, needs to be re-housed in an international organization not subject to the vagaries of domestic politics. He thinks the International Energy Agency in Paris would be a good alternative, as the agency has a history of running international collaborations on energy research.

He’s also optimistic that private funding for energy innovation will come, notably from groups like the Breakthrough Energy Coalition, a group of prominent global investors that are looking to pair with governments to help innovative energy companies to bridge the financial “valley of death” between basic energy research and commercialization.

Challenges are great on all fronts. An initial investment of $2 trillion by 2050 will be needed to reach the goal of removing 10 gigatons of carbon dioxide from the air every year by the end of the century. Yet Sanchez’s research provides a roadmap grounded in science and economics that may pave the way to tackling the biggest of environmental challenges.