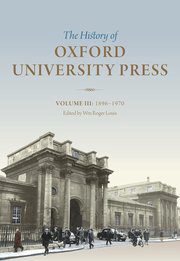 Excerpt: The records of Oxford University Press for the three-quarters of a century from 1896 suggest an enterprise with very specific economic characteristics. It published a huge number of titles and sold them all over the world, but there was real uncertainty about what kinds of books or which specific titles would sell well, at least within any given period. The accumulation of a large saleable inventory entailed cash-flow risk and perhaps risk concerning the ultimate value of inventory as an asset. Within the inherited, rather than planned, structure of the organization, some decision-making authority was granted to those outside the circle of the Secretary and his senior staff in Oxford, but much was not. The decentralized decision-making authority was assigned to a person as often as to an office. Information on the basis of which to make decisions did not flow freely, transparently, or quickly in any direction.

As a commercial enterprise, Oxford University Press had some unusual features. First, it was charged with publishing works of academic or intellectual significance, some of which might not (or almost certainly would not) make a profit. Second, it was owned by the Masters and Scholars of the University of Oxford. This meant that the Press was under the formal control of Oxford academics. Practical responsibility lay with the Delegates, who were appointed to oversee all the Press’s activities. Moreover, the Secretary to the Delegates — who acted as chief executive officer — was also, during this period, an academic, and usually a classicist. An outside businessman might have seen this absence of management experience as a recipe for commercial incompetence or at least lack of enterprise. A great deal depended on whom the Delegates employed in key managerial posts. Could their business acumen offset the presumed lack of it in their employers? Would they make wise day-to-day decisions? What about longer-term investments and commitments?