As they face today’s rapidly changing marketplace, established and successful firms have two somewhat contradictory characteristics. On the one hand, by virtue of their incumbency, they have brand recognition, customers, revenue, products, and a management infrastructure, all clearly assets that any organization would envy. But too often, they also have an inability to take the sort of risks that are usually associated with innovation, putting them at a distinct disadvantage to nimble start-ups that can pivot strategies on a moment’s notice. 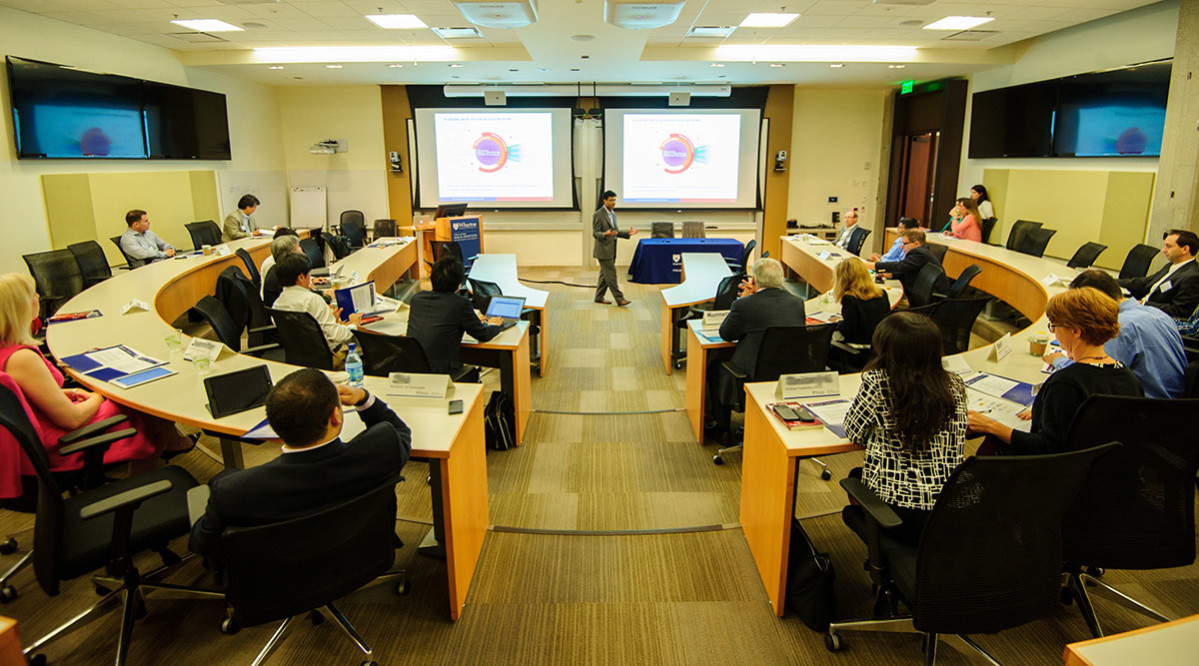 Finding the path that will allow established companies to take advantage of their strengths while also giving them the flexibility to innovate is thus one of the most pressing concerns of many executives. And it was the theme of the Mack Institute’s Spring Conference, titled “Incubating Innovation in Established Firms” and held in June at the Wharton School’s San Francisco campus.

The day featured presentations from Wharton professors, from representatives of big companies with a reputation for innovation, and from consultants known for their work in helping businesses maintain a tradition of innovation even as they grow in size.

Saikat Chaudhuri, the institute’s executive director and adjunct associate professor of management, kicked off the event by discussing the efficiency/effectiveness trade-off that incumbent firms need to balance. “It’s not necessary to have a crystal ball and always aim to be the first,” he said. Instead, companies should focus on tracking developments and reacting to them quickly, rather than trying to forecast where the world is headed. But when firms do foresee a threat to their core business, they should act boldly: “It’s better to cannibalize yourself than be cannibalized by others,” he cautioned.

Following Chaudhuri was the keynote speaker Chunka Mui, well-known as managing director of the Devil’s Advocate Group, which helps companies test their innovation strategies before proceeding with them. Mui is also the author of a number of best-selling business books, notably “The New Killer Apps: How Large Companies Can Out-Innovate Start-Ups.”

While acknowledging the difficulties that established companies have with innovation, he urged his audience to avoid the “grass is always greener” fallacy when they think about start-ups. He noted, for example, that while nearly half the members of the Fortune 500 from ten years ago are no longer on the list, that the mortality rate among new companies is much higher, exceeding 95%. 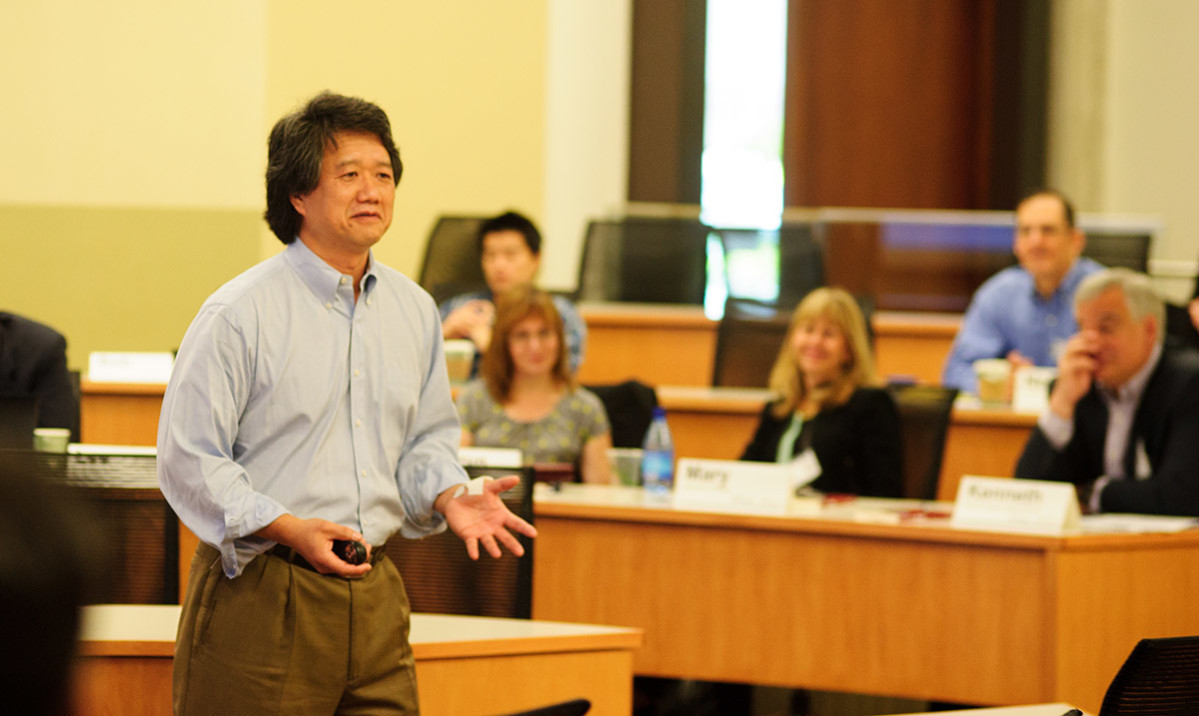 Mui’s high-level advice was for companies trying to innovate to “Think big, start small, and learn fast.” By contrast, innovation failures are those businesses that think small, bet big, and learn too slowly, he said.

The bulk of his presentation was spent fleshing out those ideas. Mui said, for example, that while companies intent on innovation should begin with no assumptions and a “clean piece of paper,” they should remember that they are embarking on a risky endeavour. “Embrace a doomsday scenario,” he said. “Think about big possibilities, but also think about the big downsides you face.”

Mui said that when attempting to innovate, it’s important to remember that it’s a social process, one that the entire organization needs to be committed to. Even though that can be difficult in cases where established product lines might be threatened, “You need to make sure that everyone is on the same page,” he said.

Watch: Chunka Mui discusses how large firms can re-invest themselves for innovation.

But there was one group he said should be exempted from that inclusion: representatives of the finance department, who Mui said can stifle innovative ideas with their demands that their ROI be unambiguously quantified in advance. Paraphrasing the famous line from Henry IV, Part 2, Mui said, “First, let’s kill all the finance guys. They are a constraining factor at big companies.”

Mui concluded his remarks by reminding his audience to keep a proper perspective on failure. They should start the innovation process not with a single big idea, but a collection of small initiatives that they can quickly prototype and test. They should remember to never “fall in love” with an idea, and in doing so fail to remember its risks and potential downsides. “Have a process for constructive criticism, review, and improvement,” he said.

And finally, companies shouldn’t be so afraid of failing that they fail to even try to be innovative in the first place. “You need to create a process that will allow for a ‘noble failure,'” Mui said. When a strategy doesn’t achieve the hoped-for results, those responsible for it should be able to tell themselves, “It didn’t work out, but we caught it in time.” 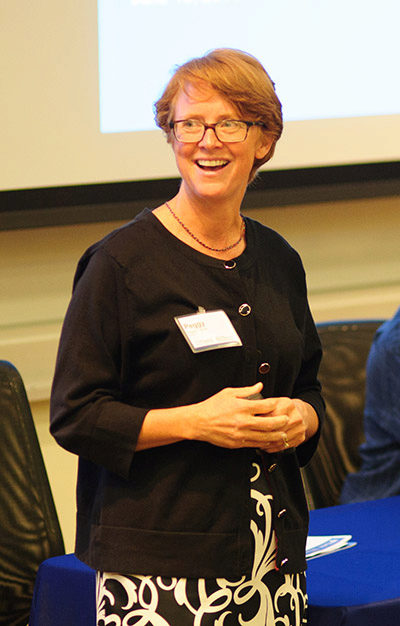 Mui’s presentation was geared at helping top executives have the right framework for approaching innovation. The next presentation took a different tack, and examined the role that hiring practices in general, and human resources departments in particular, can play in the effort. Featured were top HR officials from two companies with well-established reputations for innovation: Peggy Tayloe, Associate Vice President for Human Resources and Talent Acquisition at the India-based outsourcing company Infosys, and Prasad Setty, Google vice president for what the famously data-oriented company calls “People Analytics and Compensation.”

Infosys, Tayloe said, has a special challenge in innovation, in that it must maintain the innovative spark in a workforce of 160,000 people from 100 cultures who operate in 30 different counties.

Much of the nearly 25-year-old firm’s emphasis on innovation, she said, stems from the vision of Narayana Murthy, its co-founder and chairman. Murthy’s advocacy of constant innovation and a well-trained workforce led him to create the company’s corporate university, currently the biggest in the world and a source of training for more than 13,000 people every day. “We put a very strong focus on continuous learning,” she said.

Infosys has a number of innovation-fostering internal programs, said Tayloe, mentioning one by which employees can call out the accomplishments of their colleagues with postings on the company’s internal network.

“At Infosys, our people regularly celebrate each other’s accomplishments,” she said. “It’s driven from the bottom up, and is very popular. I’ve worked at a number of other companies, and I’ve never seen anything quite like it.”

Then came lunch, which in addition to providing food, saw attendees broken up into groups, with each group asked to deal with some aspect of industry disruption. After the break, everyone reported back on the results of their brainstorming. 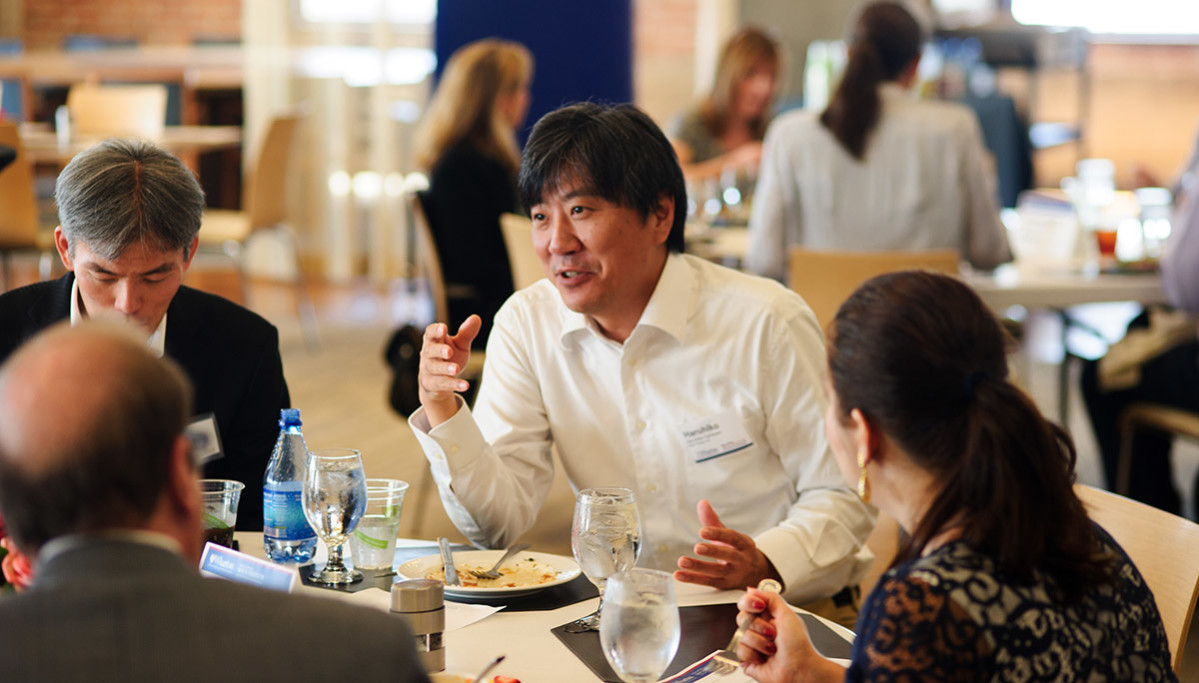 One group came up with the idea of “reverse mentoring,” which they said could occur when senior managers seek out the advice of new employees, since newcomers are less likely to be tainted by the sort of “inside the box” thinking that can hamper the free flow of creative ideas. Another advocated the idea of “co-creating” ideas by working closely with customers and soliciting their suggestions. And one group thought it might be helpful for companies in competitive situations to create a “red team” that would be charged with thinking like an opponent and probing the company for weaknesses.

Then, the presentations resumed with a panel from Intel and Amazon on how those two companies structure themselves to maintain their innovative edge.

Neil Blecherman (WG’89), who works at Intel as a Global Director for Business Development, is responsible for shepherding the company’s foray into the “Internet of Things,” and spent much of his presentation discussing the world’s exploding market for “connected devices,” when everything from smoke alarms to refrigerators becomes controllable via the Web from a mobile phone. “There will be dramatic new business opportunities,” he said.

But gathering the right people to address this market poses special challenges, Blecherman said, notably the need to recognize business opportunities in unlikely places. That, he said, requires good listening skills, which Blecherman said is one of the main attributes he looks for when he brings new people onto his team. 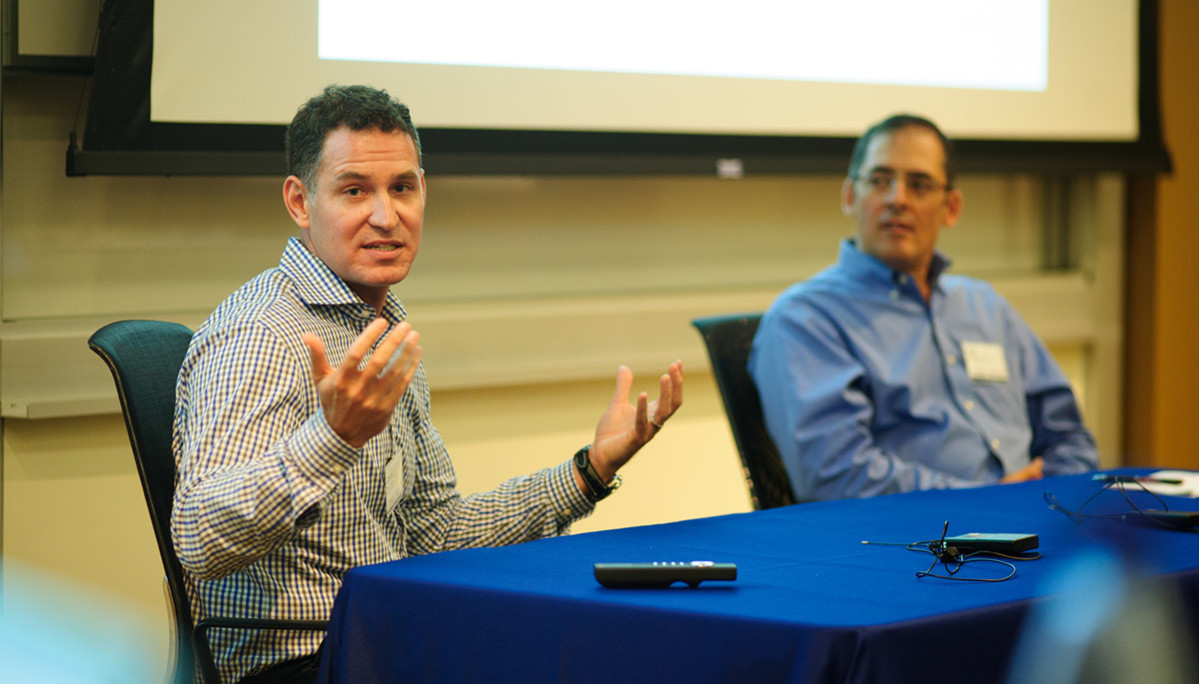 The company encourages all employees to contribute ideas for new products and services. “No one can say, ‘It’s not my job.’ Everyone feels a level of passion and ownership.”

But when submitting an idea, employees are required to write up the proposal in the form of the press release they imagine would be issued the day the new idea debuted. “They have to write, ‘Today Amazon announced this,’ and ‘Consumers will like it because of this’,” said Phillips. “They also have to write FAQs anticipating all the questions people might have. We’re not trying to be NASA and know every single detail up front. But we do want people to be able to point to something written and say, ‘This is our plan.'”

The final session of the day occurred via “telepresence,” a video link from the Wharton mother ship back in Philadelphia. An entirely different perspective, involving the effect of government regulation on innovation, was explored by two Penn experts: Cary Coglianese, the Edward B. Shils Professor of Law and Professor of Political Science and the director of the law school’s Program on Regulation; and Michael Mandel, a senior fellow at the Mack Institute and chief economic strategist at the Progressive Policy Institute.

Coglianese described a complicated relationship between innovators and regulators. In the early days of a new technology, regulation can make innovation harder by virtue of the burdens it imposes. But later, he said, the same regulations can protect the initial innovator by erecting barriers to entry to new competitors. 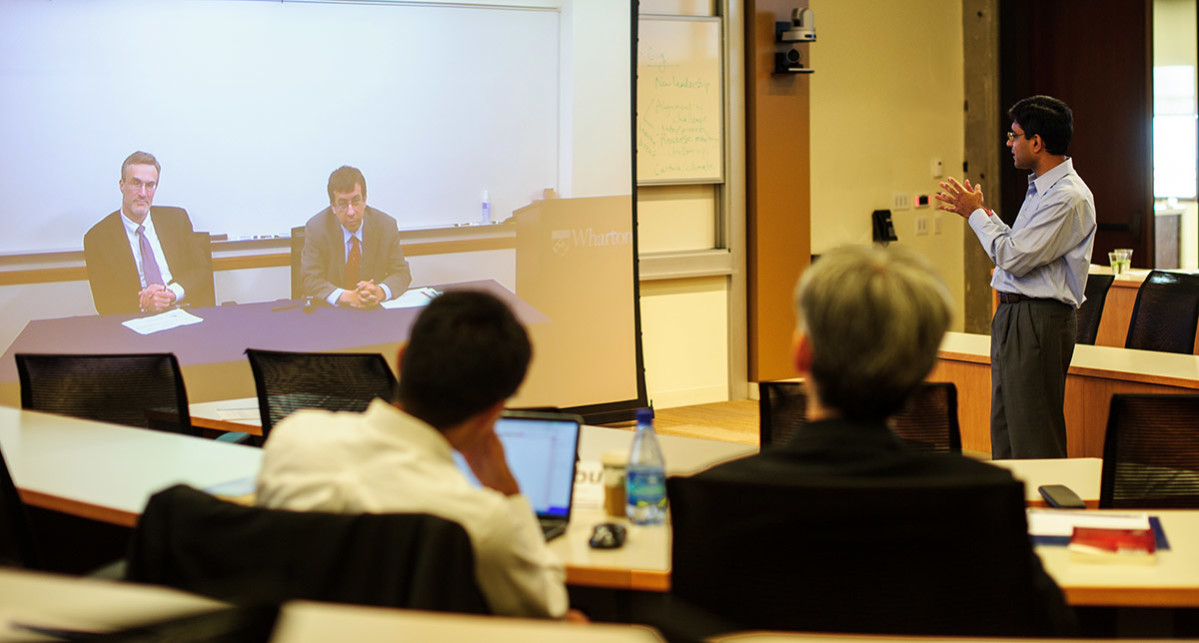 Mandel urged governments to take a cautious approach to regulating technology, saying that some ideas for regulation, such as those advocated by proponents of “network neutrality,” can end up having unintended side effects. “Things that technology regulators were concerned about in the late 90s and early 2000’s ended up never happening. The market went in other directions,” he said. “The most dangerous thing for innovation is regulators who think they know where things are going, and to try to get ahead of the curve. They can end up imposing so many costs that the innovation never occurs.”

The daylong session was wrapped up with closing remarks first from Chaudhuri, who congratulated the group for the journey they had taken together, dealing with some of the most vexing challenges facing businesses. And he reminded them of the theme of many speakers—that while innovation can be difficult, companies are behoved to attempt it.

He was followed by George Day, the institute co-director and the Geoffrey T. Boisi Professor of Marketing at Wharton, who built on some of the issues mentioned by the two experts on regulation. Day said he was concerned that considering how hard it was for industry to innovate in products, that government would find it especially challenging to innovate in its regulatory approaches. “Government tends to take a Maginot Line approach to regulation,” he said. “They are always fighting the last war.”

He then asked for a round of applause for the organizers of the event, who stood up while the audience complied enthusiastically with the request.