Knowing when to hold and when to fold isn’t just for poker players.

When applied to new technology, that insight into knowing when to embrace the next new thing and when to let it pass has been known to make or break careers and entire companies.

Think Kodak, an iconic brand that ignored the disruptive threat of digital photography until it was too late.

The Mack Institute for Innovation Management at the Wharton School of the University of Pennsylvania tackled this provocative topic at its Fall 2013 conference in Philadelphia, focusing on the automotive industry, one of the most tightly integrated and regulated on the globe.

The conference took a broad view of the industry, providing a forum for global experts on energy, environment, public policy, direct Internet sales, consumer power, and alternative means of mobility, such as the car rental business which has had to adjust to car sharing upstarts like Zipcar.

Avis’s solution was on the money. It bought Zipcar in March for $500 million.

Auto makers are awash in new technologies to improve safety, performance, emissions, driving pleasure, and convenience, and they are struggling to remain unique as cars and features are becoming increasingly homogenous.

“We don’t have all the answers, but we can make the connections,” said Saikat Chaudhuri, executive director of the Mack Institute. “We want to act as a hub of knowledge, a learning network among stakeholders on how to manage risks in handling innovation.” The automobile will undergo its first fundamental change in dominant design since the late 1920s with the introduction of electric vehicles with extensive electronic controls and IT functionality, said John Paul MacDuffie in leading off the conference, entitled When Disruptive Technologies Meet Integrated Systems: Who Captures the Value?

MacDuffie is director of the Program on Vehicle and Mobility Innovation (PVMI), a research network focusing on critical questions of mobility and the global automotive industry. He is also an associate professor of management at the Wharton School.

The November conference was the Mack Institute’s first joint event with PVMI since it joined the institute in 2013.

“Replacing gas engines with battery-powered electric motors leaves a lot of leftover room under the hood. This could allow automotive designs to become more modular. On the other hand, integrating new drive trains and electronic systems into existing vehicle steering, braking, suspension, safety and HVAC systems that meet regulatory requirements and customer expectations is an enormous challenge,” MacDuffie.

Infrastructure for fueling vehicles is well established in gas and diesel; sparse for other fuels, such as ethanol and biodiesel and nearly non-existent for recharging lithium-ion batteries or CNG.

Another likely disruptor is Tesla’s determination to overturn franchise laws — still in force in 50 states — and sell directly to the consumer. If Tesla is successful in state courts, the role of the local car dealer will be substantially reduced.

PVMI has been studying such disruptive changes in the auto industry since its founding at MIT in 1979, so it is well positioned to help established players and upstarts navigate the transformative years ahead, said MacDuffie.

Keynote speaker J. David Power III, founder of the eponymous global market research company, made his mark in the auto industry by upsetting the balance of power in the car-buying equation.

Now owned by McGraw Hill, J.D. Power and Associates was the first to collect and publish independent consumer satisfaction surveys about leading cars, displacing those generated by individual car makers.

The Power brand is best known for telling buyers which company makes the best car each year based on consumer feedback on the first 90 days of ownership. If a car score is high, the Power seal of approval is plastered on company advertising. If not, public relations teams head for damage control.

“Information collected across the industry — not tied to any company — is very powerful,” said Power, a 1959 MBA graduate from the Wharton School of Finance.

Power is also credited with predicting the decline of GM years before its bankruptcy.

Power’s story of his forty-year entrepreneurial career, establishing his firm as an authoritative voice on vehicle quality and consulting to Mazda, Toyota, Chrysler, Hyundai and others is told in a recent business biography called “Power.”

Among the many changes he predicts is the further change in the role of the car dealer. Mega-dealers (increasingly run by public companies), Internet-empowered consumers, and challenges to franchise laws will further reduce the number of dealers, once 50,000 strong in the US, now down to 17,000.

Those well-documented fires in Tesla Motors’ batteries, he added, “will be worked out.”

With regard to embracing new technology, he said manufacturers are challenged either way.

“New technology is tricky. Customers think a company is slow if it doesn’t offer certain features. If it does and they don’t work; customers are negative about the entire vehicle. Better to introduce new things one model at a time than across the board. The Mercedes key fob, for instance, was a great feature. But in the early days, if you dropped it, it broke and you couldn’t get into your car.”

Power is an advocate for more universal standards, a shift that car makers staunchly resist.

“In an age of two, three, or more cars per household, buyers don’t want to struggle with learning the idiosyncrasies of each manufacturer. Consumers want more uniformity. There is parity in quality among those vehicles that have survived,” said Power.

Reports that cars ownership is becoming passé, he said, are highly overrated. Ownership is down and leasing is up because the cost of cars has become prohibitive.

Takeshi Yamaguchi, vice president of Nissan Technical Center North America, got the audience’s attention with a video of the company’s autonomous car prototype, including one segment in which Prime Minister Shinzo Abe takes a spin.

“It’s the right time to be thinking about an autonomous project, but it’s still a very early prototype.” To arrive at the point where such cars become commonplace, Yamaguchi noted, “We’ll need more interactive conversation, including government, industries, academia and most importantly with our customers.”

The market for such a car is still unknown, although Nissan is looking at elderly or disabled folks who need help getting around. With a straight face, Yamaguchi said a “number of male drivers thought autonomous vehicles might be a good feature for their wives.”

Sophisticated technology is already in place for cars to navigate traffic while drivers do other things. However, liability in the event of an accident remains unresolved. Is it the video-watching driver or the manufacturer?

Integrated, rather than modular architecture, continues to drag the industry’s response to new technology, said Takeshi Mitamura, a mobility expert in Nissan’s Research Center in Silicon Valley, in a panel discussion entitled, When Clockspeeds Collide: Integrating IT Into New Vehicles.

Mack’s MacDuffie said he is convinced the clockspeeds of the two industries will and should remain disparate because of safety and regulatory concerns concerning a “large, heavy, fast-moving, dangerous product operating in public space.”

Scott Gaines, vice president of Strategic Initiatives for Hertz, said his company was forced to go from “very conservative to IT-centric.”

Like Avis, Hertz purchased a car sharing company and is merging some of its practices.

It is also adding rental kiosks in hotels and other venues and equipping cars with interactive touch screens to improve communication and convenience. However, Gaines is aware that the competitive advantage comes with a shelf life.

“New technology can be copied very quickly. We give it six months. Only certain things can we patent.”

Kevin McDunn, senior director of software product management at Motorola, is enjoying the company’s new status as a division of Google.

“After Google acquired us 18 months ago, we’ve become a scrappy new entrant,” said McDunn pulling a magenta Moto G phone from his pocket. Priced at $179, he said, Motorola is “unleashed” to pursue a huge market that is under served by leading cell phone companies because it no longer has to maximize margins.

“It’s invigorating to think about the next century, instead of the next quarter.”

Masiello addressed the potential consequences for the electric grid if electric vehicles (EV) are widely adopted. EVs draw upon the grid for recharging (at off-peak times when electricity rates would be low) but also provide electricity back to the grid when demand is high (earning money for the EV owner, since the utility is required by law to pay all who generate electricity, no matter how small). If Vehicle-to-Grid electricity (V2G) exchange becomes widespread, utilities will face greater uncertainty around supply and demand, unless “smart meters” or other methods of communicating information about grid activity diffuse widely.

Bhore asked whether the recent upsurge in the supply of shale gas, and the resulting plunge in the price of natural gas, will affect automobiles. Fueling cars with compressed natural gas (CNG) has been going on for some time in countries like the Netherlands and in commercial fleets in many industries. Bhore pointed out reasons why it will be difficult to develop a CNG infrastructure for fueling passenger vehicles in the U.S. that can compete effectively with the existing gasoline infrastructure; this bottleneck will limit diffusion of this fuel source for automobiles, despite the current price advantage of natural gas over gasoline. 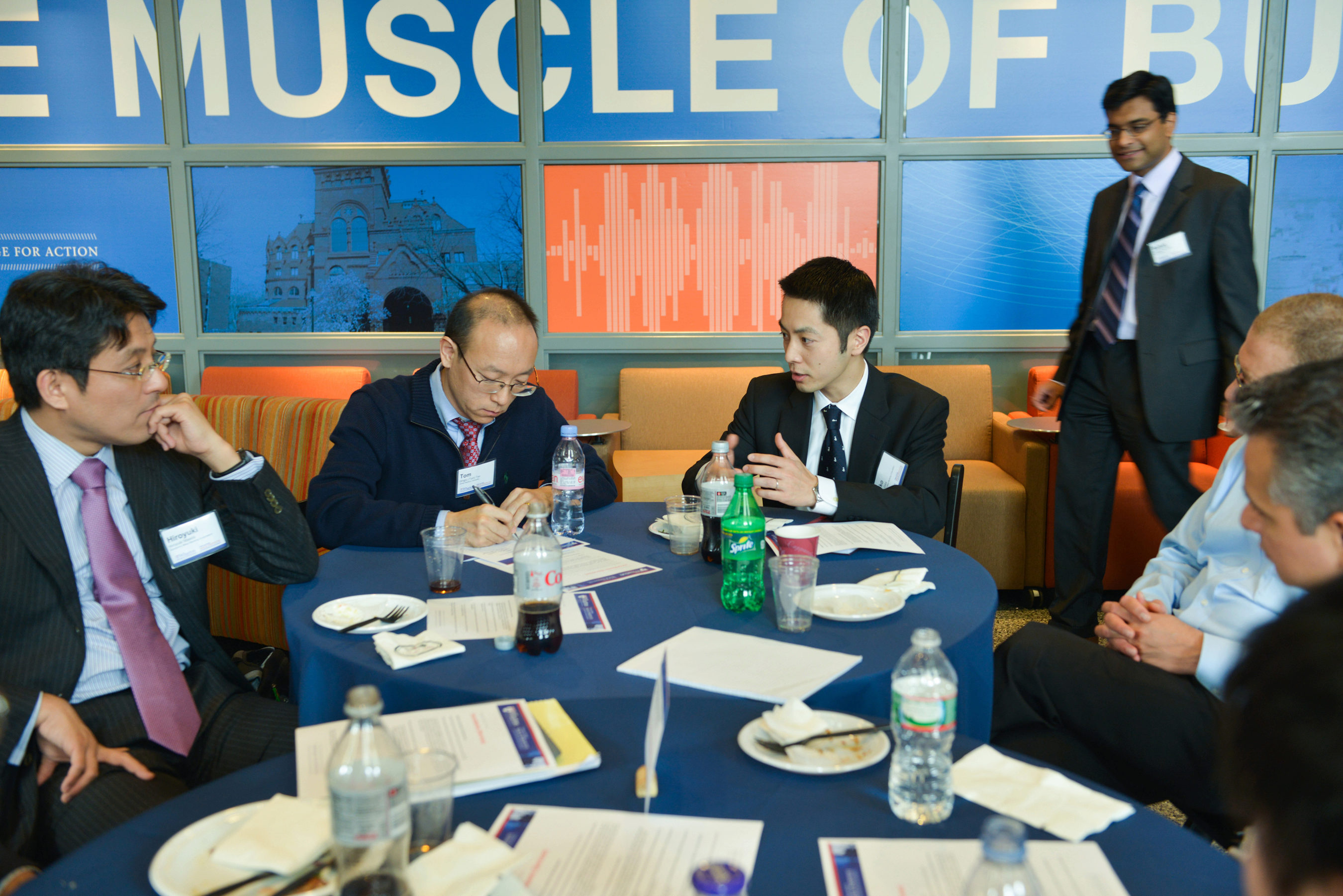 During lunch, attendees split into groups and discussed challenges of disruptive innovation from the perspectives of a legacy business, like Nissan; a disruptor, like Tesla; or a policy maker, such as a governor or mayor who must consider how or when to regulate disruptive start-ups.

For example, what impact will Uber, a private technology company that connects private drivers with people needing short-haul transportation, have on traditional taxi service?

Assuming the role of New York City Mayor, Michael Mandel of Progressive Policy Institute, said start-ups should be held to the same standards as legacy companies, with regard to safety, insurance, licensing, and other critical matters.

“Some would argue for even a higher standard. A lot of start-ups operate in a grey area of the law. More data is needed to determine if Uber is really adding to the supply and increasing accessibility, or merely cannibalizing existing service. To capture that data, city leaders might consider setting up an experimental phase.”

Another ascending trend in need of regulation is the direct peer-to-peer rental of apartments, noted Chaudhuri. Linked by the web, private owners are offering their apartments to travelers at reduced rates that are also hotel tax free.

John Constantine of Merck & Co. said his group wanted to gauge the idea of striking a state’s franchise law through the lens of a “big governor of a populous state.”

“The first state to strike the franchise law would be the disruptor and therefore might benefit from increased sales tax in the initial phase. On the other hand, there are political considerations. Gov. Christie would have to weigh the number of dealers and jobs lost if he moves to overturn the law,” said Constantine.

“I have an Explorer. When I plug in my iPhone, the GPS doesn’t work. Everyone knows about it, but they just can’t seem to make the two systems work together.”