What if free markets could reduce social inequality instead of deepening the divide? In this episode of Mastering Innovation on Sirius XM Channel 132, Business Radio Powered by The Wharton School, guest Glen Weyl, researcher at Microsoft and author of Radical Markets: Uprooting Capitalism and Democracy for a Just Society, discussed how free markets can become an egalitarian force in society by improving systems such as voting, immigration, and real estate.

Weyl’s proposed policies challenged basic assumptions we hold about our society. For example, a system in which owners sold real estate properties at self-assessed prices and paid taxes for overpricing would keep prices down and make housing more affordable. “Quadratic voting” would give each voter several votes to allocate however they wished, allowing them to put more weight behind certain decisions. If one could sponsor an immigrant and negotiate a profit-sharing system with them, everyday citizens would benefit from immigration. With these more efficient markets, Weyl believes we can level the playing field in our increasingly disparate society. He also states the need for more “policy entrepreneurship” to solve social problems using an experimental approach, much like in technological entrepreneurship.

Glen Weyl: The idea of radical markets is that markets can be an egalitarian force that liberates people from oppression and inequality, but to have markets that would allow that, we need to change some of the basic social institutions we take for granted, the way private property, voting, and immigration work. We can only have free markets if we are willing to change those basic assumptions.

Singh: Right. Let’s talk a little bit about the real estate markets that you give some more detail on in the early part of the book. In particular, you raised the question that when they’re large projects, they often get delayed or exceed budget, or estimation is hard because of the process of acquiring land. You propose a different way of thinking about it. Can you just give us a quick overview of that? You talk about how real estate markets might work through your recommendations for how people might assign a value to the property and also then there’ll be a tax basis of that.

Weyl: So, everyone would self-assess the value of the property that they own and then they’d have to pay a price on that self-assessed value and stand ready to sell that property at that self-assessed price. For every property, there would be a going price at which someone could purchase it rather than having to enter into a long and complex negotiation.

Singh: Tell us what kinds of problems that solves. I can imagine some of them, one of them being that properties are not always available and so there are some that people don’t have a good way of assessing the market other than [comparing to] those that are listed. Tell us, what would be the benefits from this? 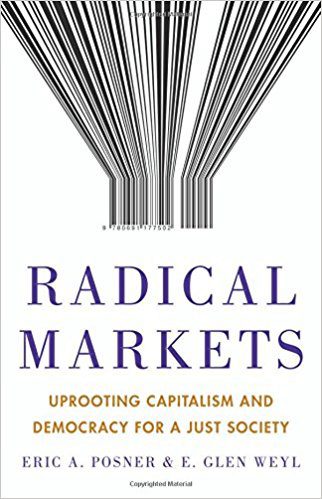 Weyl: There’s two very different types of problems. One is what you were mentioning, Harbir, which is the fact that we can’t do these really beneficial development projects because of all of these holdups of people trying to get properties together. And I would encourage your listeners to check out a really cool app that gives you a sense of this, called “City Builder,” which basically lets you choose any collection of properties in major cities, and it lets you figure out how much those properties would be worth if you could get them all together, rather than individually. In many cases, that you can get a three times increase in the value of those properties just by putting them together, and that’s being blocked by all the difficulties with doing eminent domain and, you know, all the budgeting issues you were talking about, and so forth. So that’s on the one hand.

On the other hand, we have huge inequality. So many people find it increasingly hard to live in the really expensive cities that we’re talking about. And because the tax rate on this would be quite high in order to discipline people’s prices, to keep those values low, you would raise a huge amount of tax revenue that could be used to pay a universal basic income, about $24,000, to every household of four in the United States, which would create a hugely more equal playing field.

Singh: So you’re unlocking value that is present in these properties and because of lack of information in part, people will assign a value to whatever they have and they will be willing to sell at that value. So they need to have a sense of what is their fair price, right?

Weyl: That’s right. Most people are renting or they have a big mortgage on their home, so the actual amount of equity that they own in their home is quite small. And they would only pay this tax on that net equity that they own in the home. If they wanted to make sure that they hold on their houses, they don’t have to sell it, they could overvalue their house by a significant margin, and still hold on to it. And given that they’d be receiving so much money in the social dividend, they could easily afford to do that. So, for people who find it really important to keep their house, they’d have the capacity to do that. But for people who are more flexible, who are more willing to move, they could save on their taxes by effectively making their land available for these developments that we were talking about in a more flexible way.

Singh: And the taxation part, that was that other point you made, that for those who may overstate the value, the tax is obviously based on that, so that would be a force that would prevent kind of outlandish valuations. How does one estimate a tax rate on something like this, given that it is not in existence right now?

“We need to change some of the basic social institutions we take for granted.” – Glen Weyl

Weyl: So, there’s actually a very simple principle that you can use to do this, it turns out, which is you want the tax rate to be approximately equal to the rate at which an asset class turns over every year. So, you want roughly the tax rate to be equal to the average probability with which in a year, a house moves between one owner and the next. Because, if you think about it, the incentive that you have to set a too-high price is that you might have someone buy that house and you’ll get a higher price from them. And you want that to be offset by the tax rate.

Singh: So you have a baseline based on the degree of turnover. Think about the information-rich individual versus the individual who perhaps doesn’t quite have the same level of information or analytics, how that plays into it. Everybody who owns a house would, of course, have some kind of assigned value to it, but they may be wondering, “Am I putting the right number?” There may be variation on that. Some are more sophisticated, others are not.

Weyl: Yeah. That’s a really great question. I just bought a house myself and I can’t say I was one of those information-rich people. I might be an economics professor, but I’m certainly no expert on the housing market in Hoboken, New Jersey. The real advantage of this system, from the perspective you’re describing, is that my difficulty in figuring out the market was looking for comparable houses. Only a few comparable to my apartment had sold in recent years. And in this system, because there would be a price on everything, there would be so many more comparable houses. That would level the playing field and make information available to many more people. That’s one major advantage.

Singh: That gives some confidence over time, right? There will be some sense of baselines and intervals around the median.

Weyl: Like in stock markets, right? People are able to figure out stock markets because we have all the information out there on the stock price and its whole history. We don’t really get that in housing markets. And in this system, because there would always be a price on everything, you’d have that sort of transparency.

Glen Weyl is a Principal Researcher at Microsoft Research New England whose work aims to use technology and economics to find new ways to organize societies to reduce inequality, increase productivity and ease political tensions. He is visiting Yale University as a Visiting Senior Research Scholar and Lecturer in the economics department and law school, where he teaches a joint economics-computer science course, “Designing the Digital Economy”. You can find more at @GlenWeyl.