Finnish telecom equipment maker Nokia last week announced a $16.6 billion (15.6 billion euros) deal to buy French rival Alcatel-Lucent. When the transaction is completed, the combined company will become a strong No. 2 player in its industry after Ericsson of Sweden. Nokia and Alcatel-Lucent together will also bring more R&D power to fuel innovation, although consumers of phone services are unlikely to see any immediate benefits from the merger.

Saikat Chaudhuri, Wharton adjunct associate professor of management and executive director of the Mack Institute for Innovation Management, predicts a two-fold effect from the merger. “One, consolidation typically leads to power going to the hands of suppliers,” he says. Pricing is the second area that will see an impact, he adds. Phone services providers like AT&T, T-Mobile and others in fast-growing emerging markets place equipment orders worth tens of billions of dollars. “They have been able to call the shots [thus far],” pitting suppliers and vendors against each other, Chaudhuri explains. But now, Alcatel-Lucent and Nokia could help the industry as a whole gain ground.

Chaudhuri spoke about what the merger means for the telecom industry’s supply chains and the task ahead for Nokia on the Knowledge@Wharton show on Wharton Business Radio on SiriusXM channel 111.

Ericsson and China’s Huawei today dominate the supply of telecom networking equipment at the two ends of the market, according to Chaudhuri. “The deal will redefine a sector suffering weak growth prospects and pressure from low-cost Chinese players Huawei and ZTE,” according to a Reuters report. Reuters notes that with combined sales of some 26 billion euros ($28 billion), the merged entity will command a global market share of 35%, behind Ericsson at 40% and ahead of Huawei’s 20%, citing Bernstein Research.

“Consolidation typically leads to power going to the hands of suppliers.” – Saikat Chaudhuri

Chaudhuri believes Nokia’s deal with Alcatel-Lucent is consistent with the consolidation the telecom networking equipment industry has witnessed in recent years. Ericsson three years ago exited a mobile handsets joint venture it had formed with Sony in 2001. “[Ericsson] focused instead on the mobile network equipment business, which is booming and more profitable [than the handsets business],” he says. Similarly, Nokia two years ago sold its handset business to Microsoft after losing its leadership in that market, preferring to focus on mobile networks. Currently, Apple and Android-based mobile phone makers including Samsung and HTC dominate the industry.

Nokia’s deal with Alcatel-Lucent makes sense for both companies, according to Chaudhuri. For Nokia, it provides a bigger global footprint. Lucent had been a heavyweight in the U.S. market while Alcatel was strong in Europe before the two companies merged in 2006. Nokia, on the other hand, has had some traction in the Asian market in networking equipment. With Alcatel-Lucent in its fold, Nokia could claim a truly global presence and go after bigger deals, Chaudhuri notes.

Lucent, thanks to its lineage going back to Bell Labs, also has strong R&D capabilities that should help fill Nokia’s gaps in that area, Chaudhuri says. For Alcatel-Lucent, Nokia’s offer was “too good a deal to pass up,” he adds. The company had been “struggling” and the price of $16.6 billion represented “quite a premium,” he says.

“To make this [merger] work, it is important to have a strong capabilities-based approach.” – Saikat Chaudhuri

After the merger, Nokia will have a bigger client base and could ship more and better-quality products, along with the ability to negotiate harder with its customers, says Chaudhuri. The firm also will enjoy flexibility in choosing which facilities it wants to operate which it will shut down or downsize. “Scale is everything in this,” he adds. 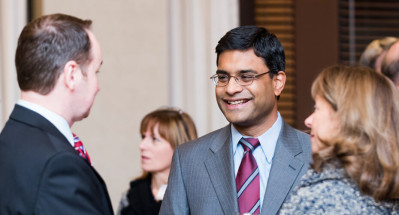 However, Nokia may have to contend with situations where Alcatel-Lucent will want equal say in decisions, he notes. “To make this work, it is important to have a strong capabilities-based approach, which is to figure out which of these three entities — Alcatel, Lucent and Nokia — is strong in each area and put the leadership and teams in charge from these respective areas for the global combine,” he says. “That [approach] will be able to garner more success than if Nokia tries to impose its own way.”

Chaudhuri says Nokia also needs to watch out for the threat from Huawei, although the latter has faced obstacles in the U.S., the U.K., Australia and India over concerns around national security (thanks to the Chinese state ownership in the company). But that scenario could change in Huawei’s favor. “At some point, cost plays an important role, especially if private enterprises are buying the equipment,” he says. “Secondly, Huawei is now no longer just producing low-end products.” The company began as a maker of copycat versions of competitors’ products, but it now has its own innovation efforts. Chaudhuri notes that in the past decade, Huawei has been winning many equipment orders, especially in fast-growing emerging markets.

Consumers may not see any immediate gains from the merger, even if phone services companies save on their equipment purchases, says Chaudhuri. “The way the Verizons, AT&Ts and T-Mobiles operate is to go by willingness to pay,” he says. “The companies may achieve some savings at their end but I’m not sure if it will be passed on at the other end.”

“The way the Verizons, AT&Ts and T-Mobiles operate is to go by willingness to pay.” – Saikat Chaudhuri

However, in the long run, consumers will benefit from “the R&D prowess” of the merged company with newer products and services, and also faster and more reliable service, Chaudhuri says. The merger is expected to be finalized by mid-2016 and generate savings of $960 million over the next three years.

It helps Nokia that the global wireless services market is growing impressively, and future opportunities are bright in data communications, says Chaudhuri. The company could also gain fresh traction in Asia, where mobile services providers such as India’s Airtel and China Telecom have been growing their networks rapidly in a low-margin, high-volume model, he adds. These companies would try to secure lower prices by pitting equipment vendors against each other, but the latter could also benefit from volume growth. “If the pie grows [to be] big enough, everybody can benefit,” he says.