How can companies innovate strategically when the world is changing so rapidly? On this episode of Mastering Innovation on Sirius XM Channel 111, Business Radio Powered by The Wharton School, guest Baba Prasad (WG’97), President and CEO of Vivékin Group, discussed how to incorporate agility at the individual, team, and organizational level.

As humans, we rely on our intelligence when we are faced with unprecedented situations. Prasad’s research revolves around finding the equivalent of that intelligence within organizations, through what he describes as the five types of agility. Agility, much like innovation, is not a product or a process, but stems from a mindset and a culture. Prasad laid down his frameworks of agility, emphasizing the need to go beyond quick responsiveness to deliberate strategy.

Then, there’s the inventive agility, which is about trying to create new solutions when the old solutions don’t work or nobody knows how new things will work. You have a new technology on hand. Can you use it in different ways? This is inventive agility.

Communicative agility is the fourth agility. What collaborations can I make? How can I persuade people? Can we change the market? You’ll see that a lot in the marketing aspect of the company or communication crisis handling. All these come under communicative intelligence.

These were the four initial intelligences or agilities that I had. As things went along, I found that some of the companies that I was calling ideal with these four intelligences failed, and one of these wasn’t drawn. Then, the question comes up: what was missing? They had all these four agilities. Why did they fail? I went back to the drawing board.

It was very easy to say ethical because they were basically not performing well ethically, but that was not really the answer. What I found was quite often, you might be ethical. You might be very good natured about things, but you might not have thought of the long run. That’s where the strategic component comes to me, and that’s what I call the visionary agility. Do you have the ability to see things in the long distance? Can you think beyond the here and now? Can you think of the long-term? This is where the fifth agility comes in.

Once you master these five agilities, then automatically the question comes, “Oh, I have a situation. Which agility should I use?” Then, the context sensitivity comes in. You have to have a particular agility or a particular combination of agilities for this particular situation. This is a nuanced way of looking at agility, taking it beyond the fast response that we’re thinking about to a different dimension.

“Innovation is not about a process or a product, but it’s really about developing the culture within the organization.” – Baba Prasad

Saikat Chaudhuri: That makes a lot of sense. We live in the new normal, which is basically about constant change. But as you suggested, this really started much earlier, and you drew your ideas from the late ’90s. I wanted to ask you, as you gave us a nice example of Enron: are there other examples in particular of the first four agilities that you describe? How can companies take those ideas and face the constant dynamic environments and changes that they have to master on a day-to-day basis?

Prasad: Let me give you a couple of examples here. One big lesson that comes to me for innovation is that just being innovative does not count. That’s what the Enron lesson is because if you recall, Enron was for six years in a row called the most innovative company in the world, and suddenly it went kaput.

The big thing is that just being innovative doesn’t count. Innovation is really a culture. It’s not about a process or a product, but it’s really about developing the culture within the organization. There’s also this big debate in innovation about disruptive versus continuous innovation. I feel that’s not such a reasonable debate to have. Actually, you should have both. 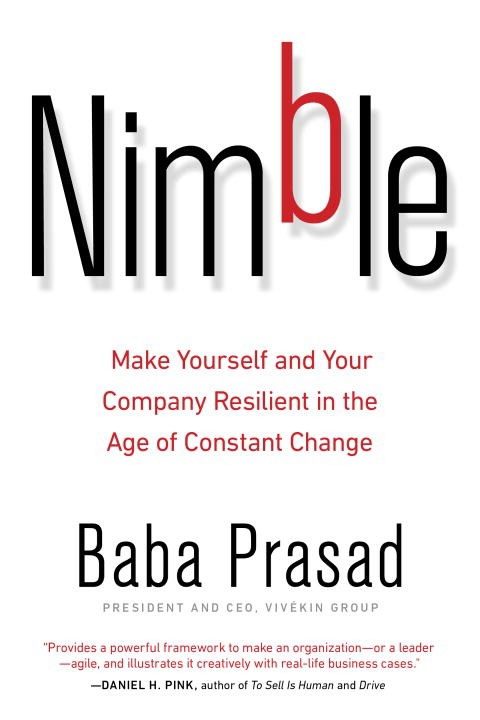 In my book, I talk about this process called “exaptation,” which comes to us from fossil science, where you’re taking stuff that is already in the company and finding new uses for it. This is from Steven Jay Gould. Actually, there’s another very interesting lesson that comes from Steven Jay Gould in this particular context, with fossil sciences. He was looking at the fossil records and found a very interesting phenomenon there, which he called punctuated equilibrium. For long periods of time in the fossil record, you see a very small evolutionary change, and then suddenly, after a long period of time, you see a new species emerge.

If you take that analogy back into our companies, what we need to do is build a culture around generating a lot of small ideas, and certainly because of that culture, a big idea will emerge on its own. This is somewhat akin to what Toyota does. You might have seen the Yūzō Yasuda book “40 Years, 20 Million Ideas” which means they’re generating 500,000 ideas a year, but that seems stupendous. I did a quick back-of-the-envelope calculation. If you compute that against the number of people they have in the organization, it’s about two ideas per person in a year. That’s nothing, so you can actually implement that. So, how do you create a culture in which you can actually do that kind of idea generation?

I have two other examples in the book, especially from the point of view of innovation. Avery Dennison struggled with innovation because they had too many ideas that they were bringing to the table and implementing. As a result, what happened was they got a lot of ideas, couldn’t manage finishing any of those, and ran into real problems. Then, they sat back and had to bring the analytical and the operational thinking into it and say, “Okay, we should be more clear about what ideas we will take in and not take every idea into production.”

“Things shift around in organizations, and you need to be able to be agile in different ways.” – Baba Prasad

That’s the story that’s going on around Lego. Lego had too many products in the mid ’90s and was on the verge of collapse in ’94, but then they went back, did their whole analysis, and found that they had to boil down their innovation portfolio. Then, they were up for a long time. Now, as of last week, they’re having huge problems with managing the supply chain. Things shift around in organizations, and you need to be able to be agile in different ways.

Baba Prasad is a leading thinker in the area of management strategy and leadership. He is President & CEO of Vivékin Group, a management consultancy that focuses on helping leaders and organizations become strategically agile. Prasad has a Ph.D. in Operations & Information Management from the Wharton School, where he has also been a Fellow since 1997. He teaches courses on strategy and innovation at various business schools.

Prasad studied computer science and artificial intelligence and robotics at universities in India and the US. He has been a technology strategy consultant on Wall Street, and has served on the faculty in the business schools at Purdue University and the University of Minnesota. He and his wife, Professor Leela Prasad of Duke University, also work in economically underprivileged schools in Hyderabad, India. They helped to set up “Aksharavani,” a school for children of migrant construction workers, in the city. They are currently making a documentary film titled Moved by Gandhi.