A team both diverse and unified around a common idea is difficult to achieve, but crucial for successful innovation. On this episode of Mastering Innovation on Sirius XM Channel 111, Business Radio Powered by The Wharton School, guests Michael Lee (W’18) and Henry Zhou (C’18, Ch’18) from Cellview Sciences shared how they effectively balanced their team’s expertise in business and science to win the 2018 Y-Prize Competition.

Along with their third teammate, Ellen Naruse (W’18), Lee and Zhou created Chromosense, a testing procedure for in vitro fertilization that screens early-stage human embryos for genetic abnormalities. Using carbon nanopipettes to inject molecular “beacons” into the nuclei of developing embryo cells before they are implanted in the woman’s uterus, the team hopes that Chromosense will scan for chromosomal abnormalities in a way that is faster, safer, and more accurate than current solutions on the market. Lee and Zhou discussed how they benefited from their chemistry as friends, their different backgrounds of study, and their shared trust in each other and the project to take their winning idea over the finish line.

The Y-Prize is an annual competition at the University of Pennsylvania co-organized by the Mack Institute. The 2017-2018 competition featured two new nanotechnologies developed by Penn researchers: Nanotribological Printing, a small scale analog to 3D printing, and Carbon Nanopipettes, capillary glass tubes small enough to penetrate a single cell with minimal damage.

Saikat Chaudhuri: How difficult was it to marry the understanding of the science or the technology with the business side? Oftentimes in companies, we see that both sides work in separated silos. You were a team that was able to span these different areas of interest and expertise. Was that hard?

Michael Lee: I would say it wasn’t extremely difficult, mostly because we started with that mindset from the beginning. Our idea generation phase was something like this: as a team, we would throw around areas where it might be useful to be able to pierce the single cell without damaging it. Then, in these areas, once we picked one, Henry would look into all the different techniques and processes that were in use in that industry, and describe how they could be improved using the technology. Ellen and I would then look into it and see whether or not that would be a viable business idea — how much of an improvement it would provide over existing methods, how big the market was. Then, based on a combination of technical feasibility and business viability, we would either save the idea or trash it. That was in our mindset from the start, so I think that, through the whole process, it stayed fairly integrated.

Henry Zhou: Something that I found really interesting through the process was sometimes, Mike and Ellen would read a random article that they saw in the newspaper or on a website, and then bring it to me and say, “Hey, I read about this cool thing. What do you think about this idea? Could we potentially apply our technology to this other idea?” It’s something that definitely arose organically. It really helped us try different things and weigh our options when it came to what’s the best use of the tech.

Lee: If I might just add to that, there were also moments when Henry would come to Ellen and me about something that he thought of on the business end and would say, “I’m thinking about how we’re calculating our initial market size for the pitch, and maybe we want to use this dataset instead.” We acknowledge that each one of us has our own relevant areas of expertise. One of the really strong parts about our team is that suggestions can come from anywhere. Everyone’s ideas are taken, then considered by the people who are the most knowledgeable and sorted that way. I think that’s a huge asset.

Nikolaj Siggelkow: Of course. Now I’m intrigued. What were some of the other ideas?

Zhou: We had a bunch that we threw around. Let’s see. I, in particular, was really inspired by Carl June’s work — here at Penn, actually — doing work on CAR T-Cell therapy. I was trying to imagine an application where we could remove cells from the human body, then use these nanopipettes to manipulate them, inject them, and send them back in. That was an idea that we threw around for a while, but couldn’t really gain traction on it. What else do you remember?

Lee: Another one was, we proposed using the CNPs for medical R&D, just to manipulate cells to the micro level. I think one of the other competitors did end up running with that and using it in the presentation. But, this is a situation where you bring up an idea, and then you defer to the person who knows more. Henry said, “That’s not going to work,” so we threw it out.

Chaudhuri: What’s really fascinating about listening to both of you talk is — and I’m sure if Ellen were in the room, then it’d be the same — a lot of the things that we know about good teams and how they function come so naturally to you, perhaps due to thoughtful effort, but also somewhat serendipitously. Things like picking a team that has complementary skills as diverse in many ways, but also quickly experimenting with ideas, having ways to decide early on whether or not they’re feasible to pursue, finding the right amount of expertise in coordinating, collaborating, and picking the right resources to augment what you do. 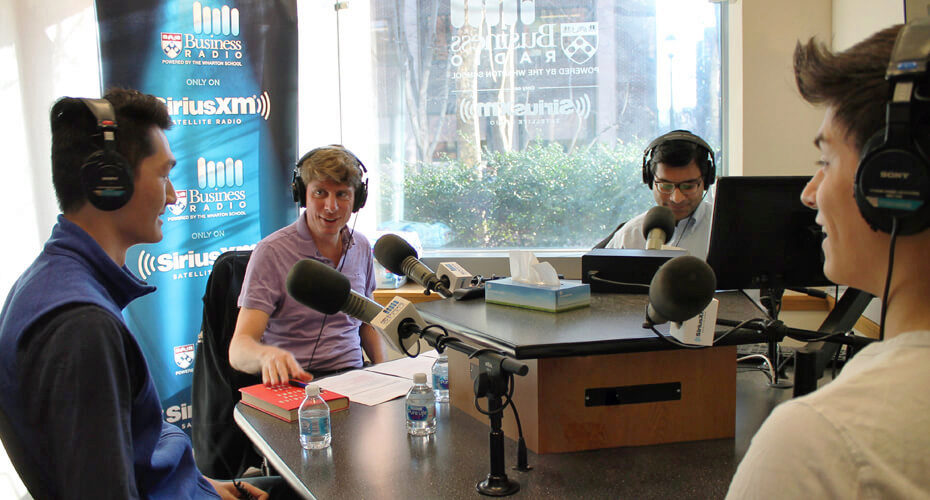 You make it sound really easy, but frankly speaking, many companies and organizations struggle with this. We’re really impressed that, as students, you’re able to take advantage of it. What advice would you give to other students or organizations who want to do commercialization, bridging technology, especially emerging technology, with business and working on something longer term?

Lee: One thing I would say is: having a team with complementary skill sets, that’s the biggest thing. If it were just Ellen and me, without Henry, I’ll get straight up and say that we wouldn’t have won.

You really need expertise in both the science and the business end to bring it together and make it work because you could be business savvy, but if the science behind your ideas isn’t solid, it’s not going anywhere. You could have a brilliant scientific idea, but you could be not great at pitching it or you might not be able to make the investment thesis to an investor, and because of that, it won’t go anywhere.

Two, I would say, is the willingness to invest time into something like this. It’s huge.

Ever since we formed our team at the beginning of September, we pretty much met once a week, at least, and near the end, more than once a week. During periods of high stress, we were pretty much meeting every day. Honestly, I think just the amount of time we put into it really is a big driver of what we ended up doing.

Michael Lee is a senior at the Wharton School studying Statistics and Entrepreneurial Management. He is a 2018 Venture for America fellow and the CEO of Cellview Sciences, winner of the 2018 Y-Prize Competition. Cellview Sciences’ first product is Chromosense, a new method for the genetic testing of embryos prior to in-vitro fertilization which reduces miscarriage rates in women of advanced maternal age.

Henry Zhou is a senior at the University of Pennsylvania in the Vagelos Scholars in Molecular Life Sciences Program, studying biochemistry and submatriculating for a Master’s of Science in Chemistry. He has four years of basic science research experience with Dr. Bonini in the Department of Biology and Dr. Bashaw in the Department of Neuroscience. He is CSO of Cellview Sciences, co-founded with his classmates and friends, Michael Lee and Ellen Naruse, in September 2017.