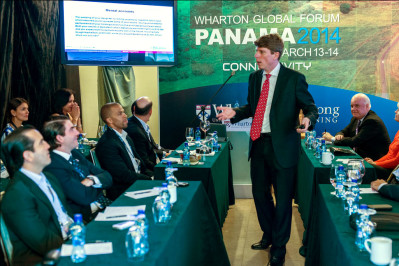 Every year, the Wharton School hosts two Global Forums that bring together leaders from business and government, provide an opportunity for alumni to connect, and showcase faculty’s research. In the spring of 2014 our Co-director (and today’s guest author) Nicolaj Siggelkow attended the Global Forum in Panama, which included more than 300 participants. As part of the Mack Institute’s expanded global footprint, we plan to have an active presence at all future Global Forums.

Innovation and entrepreneurship are currently playing a very important role in Panama. The current government, through liberalization of immigration laws and low taxes, has created an environment very conducive to innovation and entrepreneurship. (Indeed, one way to gain permanent residency in Panama is to start a new enterprise!) In addition, since the canal became Panamanian property in 1999, the government has spent considerable resources in upgrading infrastructure. Given its central location, it is has developed into a key node of transport and logistics of goods and services in the world.

With the completion of the expansion of the Panama Canal by (hopefully) end of next year, Panama will strengthen its position even more. The Wharton Global Forum was kicked off with speeches by Panama’s President Ricardo Alberto Martinelli Berrocal and Minister for Canal Affairs Mr. Roberto Roy. It was actually at the Forum that they announced that they had reached agreement with the international construction consortium responsible for the expansion of the canal, so that construction could resume and be finished by the end of 2015.

While in Panama, I had the opportunity to host a reception for entrepreneurs, innovators, and venture capital and private equity investors. It was a fascinating group that came together and shared their experiences in Panama and the rest of Latin America. Later in the Forum, I had the opportunity to also give two Lifelong Learning Master Classes on “Managerial Decision Making.”

Overall, the Forum was a great success for all participants. Should you have the opportunity to be in Beijing during June 12-14, 2014, or in Bangkok during March 12-13, 2015, you might consider attending the next Wharton Global Forums. Each Forum is a wonderful networking opportunity coupled with timely, interesting content (i.e., the same that we strive for in all Mack Institute events.)

Mack Institute corporate partners interested in participating in a future Global Forum should email Jennifer Buchness at buchness@wharton.upenn.edu or call 215-898-2523.