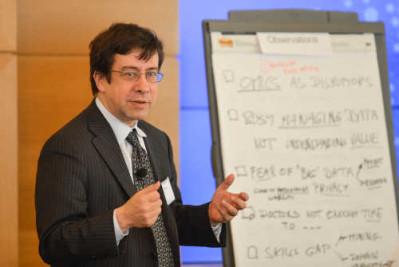 Michael Mandel discusses the implications of the nomination of a new Federal Communications Commission (FCC) head for domestic mobile broadband regulation in an article co-authored by Diana G. Carew.

As Mandel and his co-author illustrate, the regulatory framework governing mobile broadband has gone undecided for several years. What is at stake for potential FCC head Tom Wheeler is whether to treat mobile broadband as different from fixed line services, and thus involve the organization more deeply with regulating and encouraging mobile competition. The alternative would be to think about the U.S. as a data-driven economy and take less of a role in regulating mergers and prices.

The article, published in Governing, lays out the pros and cons of both courses of action and provides several arguments for favoring the less regulated approach.

Michael Mandel is a Mack Center senior fellow and the Chief Economic Strategist at the Progressive Policy Institute. He is the founder of Visible Economy LLC, a New York-based news and education company and the president of South Mountain Economics, a consulting company.