It started, as many great things do, over a few glasses of beer.

In fall of 2015, Alexander David, Shashwata Narain, and Siddharth Shah got together with some friends to brainstorm ideas for the Y-Prize Competition. This competition presents participants with three new Penn-developed technologies and asks them to identify a problem that one of those technologies can solve. They knew they were interested in the microfluidics technology developed by the Issadore Lab at Penn; now they needed to find their problem. Christopher Bernard, a microbrewer based in Philadelphia, had one for them:

“The largest bottleneck in beer production is its fermentation — can you solve that?”

This piqued their interest, and further research validated what Christopher had told them. Fermentation accounts for 95% of the beer production process — true for industry giants, true for the microbrewery around the corner. Speeding up fermentation would reduce the amount of time that inventory spends tied up in vats, substantially reducing production costs. Eric Clemons, Wharton professor and beer company consultant, confirmed with what the team had learned: “We have been trying to cut short the fermentation time for years now; it’s a globally prevalent issue.”

Using the microfluidics technology, which can produce nanoparticles of liquid with extremely precise specifications, the team devised a way to concentrate sugar liquids around individual yeast cells. This technique greatly increases the surface area of the yeast exposed to the sugar, accelerating fermentation by 70%. The end result, they say, tastes and looks identical to the traditionally-brewed stuff. 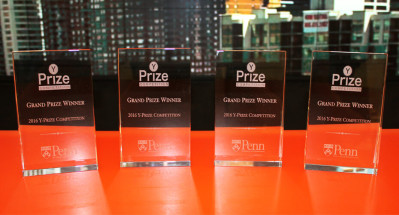 Fast forward to the night of January 25, 2016, when the team emerged as the winner after pitching their idea to a panel of faculty, venture capitalists, and industry experts. They will receive the $10,000 grand prize as well as a non-exclusive license to commercialize the technology. After testing their idea further in the Wharton Business Plan Competition, they plan to pilot their technique in 2016 with a handful of microbreweries and large-scale manufacturers.

The two other finalist teams in the competition, VivaVaccines and Amsterdam Fluidics, truly gave the Fermento folks a run for their money with impressive presentations. These teams, who also chose to use the microfluidics technology, pitched ideas for a vaccine-delivery skin patch and a novel technique to encapsulate cancer drugs. “The margins of victory here are very small,” said Wharton professor David Hsu, co-founder of the competition. Head judge Dean Miller, President and CEO of Greater Philadelphia Alliance for Capital & Technologies, agreed, encouraging all three finalist teams to wholeheartedly pursue their ideas and seek additional sources of funding.