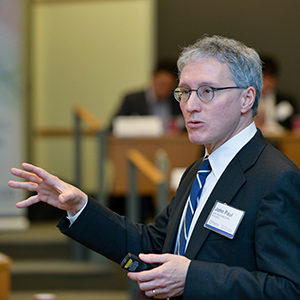 Volkswagen shocked consumers and industry insiders worldwide when the German automobile giant admitted to cheating on EPA emissions tests. It had installed software that affected engine performance in over 11 million diesel-powered vehicles.

Wharton management professor and PVMI director John Paul MacDuffie discussed the implications of the Volkswagen scandal as a guest on the September 28 episode of Radio Times with Marty Moss-Coane. MacDuffie was joined by fellow guest Dan Becker, Director of the Safe Climate Campaign.

Perhaps the most shocking part of the scandal, MacDuffie and Becker point out, is the blatancy of the deception: the cheating mechanisms likely involved every level of management as well as the manufacturers. Martin Winterkorn, the previous CEO of VW, has resigned as a result, and it is possible that charges will be brought against VW executives and other company individuals.

As for the future of VW, its reputation and brand image has been severely damaged, particularly, MacDuffie adds, because its marketing had highlighted its supposed dedication to clean diesel. The company has set aside billions of dollars to manage the aftermath with many potential lawsuits looming on the horizon.

It is also possible that VW will issue recalls or buybacks of its faulty vehicles, although MacDuffie points out that the percentage of consumers who actually follow through with recalls is relatively low. “Diesel has struggled in the U.S. market…Some people will think that Volkswagen may be wise to abandon diesel and push more quickly into hybrids and electric vehicles, partly as a kind of penance or a way to redeem their image,” MacDuffie adds.

“Volkswagen may be wise to abandon diesel and push more quickly into hybrids and electric vehicles, partly as a kind of penance or a way to redeem their image.”

Currently, auto companies are responsible for testing their own vehicles to ensure that they comply with EPA emissions rules. The government spot checks 15-20% of vehicles to confirm company findings, yet recent scandals indicate that more stringent government oversight, such as the inclusion of random road testing, may be required. Although these companies have been pushing back, the prevalence of cheating may justify more intensive industry regulation, and MacDuffie highlights that the public will likely be on the government’s side this time around.

“There is ambivalence in this country about the level of regulation. Businesses push against it pretty hard, but these issues are times when tougher sets of regulations can be broadly supported,” MacDuffie said.