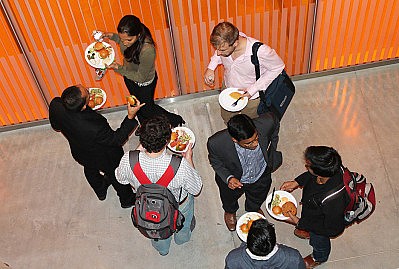 While much of the country was staying up late on the first Tuesday in November to watch election results roll in, for Mack Institute staffers the night after was the real nail-biter. This was the deadline for entries in the Y-Prize, and our anticipation was well rewarded. Just around midnight the submissions jumped from a paltry few to nineteen total entries, the most we’ve received in three years of running the competition.

(We’re confident that this timing was a sign not of procrastination on anyone’s part, but of students’ devotion to polishing their submissions to perfection. All of the entrants will certainly agree.)

“We’re thrilled to have received a record number of entries!” says Vijay Kumar, co-founder of the competition. “Each entry represents a creative approach to develop and commercialize the results of Penn research, and many of these are quite remarkable. We are excited that so many students are actively engaged in technology innovation.”

The Y-Prize is a contest in which members of the Penn community compete to propose the best applications for an existing technology. This year’s competition focuses on three exciting new nanotechnologies developed by Penn faculty. Each entry included a five-minute video pitch and a supplementary slide deck detailing the proposed idea and business plan. The submissions covered an impressive range of fields, including renewable energy, environmental analysis, emergency response, wearable technology, and medical devices.

Over the next few weeks, the entries will be reviewed by a panel of five judges who have both depth and breadth of experience in the start-up/venture community, as well as technical expertise in nanotechnology. The judges will select four finalist teams, who will each receive guidance from a tech consultant and a business consultant to help refine their proposals. The competition will conclude on January 28th, when the finalists will pitch their ideas live for a chance to win the grand prize of $5000 and licensing rights to the technology.

On behalf of the entire Y-Prize planning team, we congratulate all the students whose hard work paid off with such an exciting slate of entries. Stay tuned for our announcement of the finalist teams on November 21st!

Visit the Y-Prize website for more information about the competition.