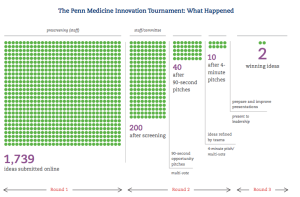 Innovation tournaments are an increasingly popular tool for organizations looking for fresh ideas: they open the gates to ideas from all employees, especially those on the front lines, and let people vote on their colleagues’ ideas to narrow the pool. This leads to consideration of increasingly smaller groups of ideas until the very best emerge victorious from the fray.

When the University of Pennsylvania Health System was looking to improve their patient experience a few years ago, they turned to Christian Terwiesch (now a Mack Institute Co-director, who helped write the book on innovation tournaments). At our 2012 conference on Learning from Failures in Innovation, Terwiesch described the particular strategies and unexpected outcomes that resulted from Penn Medicine’s tournament.

Although Terwiesch characterizes the American Idol-type approach as “quite powerful,” he also cautions that it’s an appropriate strategy only under specific circumstances. In Knowledge@Wharton, he describes the types of problems — and the types of companies — that have the best odds of succeeding with an innovation tournament.

Aside from identifying a great new idea, innovation tournaments can introduce quite positive side effects, such as increasing employees’ sense of participation and commitment. Whether through a pop-culture phenomenon like American Idol, a worldwide show of sportsmanship between nations like the Olympics, or an organization-wide search for betterment like in the Penn Health System, the energy generated by mass-participatory competitions can be an undeniably powerful force.

Listen to Christian Terwiesch describe the forms this productive energy can take even when an idea fails.