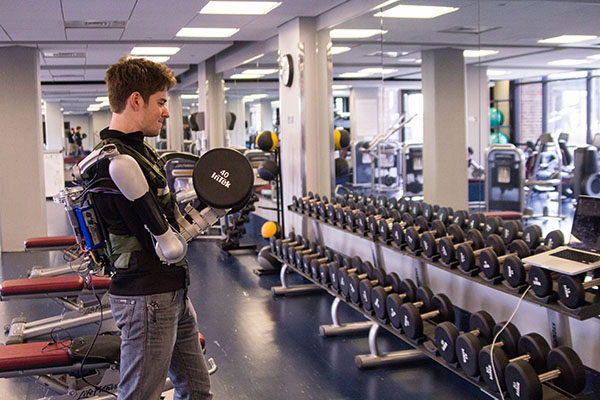 The Mack Institute is excited to host the Y-Prize Spring Kick-off on Monday, January 27 at 6:00 P.M. in Huntsman Hall 340. Attendees will hear from keynote speakers Elizabeth Beattie and Nick McGill, two members of the team that created the Titan Arm—an upper-body exoskeleton that increases the wearer’s ability to lift by 40 pounds.

In this guest post, Beattie describes how assembling a team with a diverse skill set was crucial to the Titan Arm’s success.

In the last 50 years, exoskeletons have emerged as leading tools for augmenting natural human strength, enhancing mobility, and restoring limb function after injury. Designed to attach to the body’s natural architecture, these systems are usually depicted in science fiction films worn by superheroes and remain out of reach for the average person. In fact, much of the existing exoskeleton technology is still under development in research labs and has remained out of the marketplace.

As the product of a senior year capstone project, I worked to change this paradigm along with Niko Vladimirov, Nick McGill, and Nick Parrotta. As a team of four mechanical engineering undergraduates, we became interested in making exoskeleton technology accessible to a large population of users. Instead of aiming to design the next Iron Man suit, our goal was to create a device that could be worn by patients needing an extra boost. We imagined an exoskeleton that was low-cost, lightweight, portable, and simple to operate. Over the course of 8 months, we designed and built the Titan Arm – a proof-of-concept powered upper body exoskeleton for applications in physical therapy and occupational lifting. Titan was developed for just under $2,000, weighs 18 lbs, and can augment a user’s strength by 40 lbs in addition to what he or she can naturally lift.

Our invention hit a home-run when we placed second in the SEAS wide senior design competition here at Penn. However, the impact of our invention soon extended beyond the classroom. Most recently, Titan Arm competed against 650 entries from 18 different countries to become the first US winner of the James Dyson Award.

Our team’s success stemmed from a variety of factors. We are all highly motivated individuals who were ready to tackle a challenging problem. We actually formed our team prior to thinking up the idea for Titan Arm. Although the four of us had the same fundamental mechanical engineering background, we each brought our own unique skills to the group. We incorporated knowledge of engineering entrepreneurship, machine design, electronics, software development, manufacturing techniques, and biomechanics to build a finished product. This multidisciplinary skill set was essential to our success.

In addition to combining our skills, finding mentors to speak with during development and intellectual property process was invaluable. We are currently pursuing patent protection, and our mentors have been essential contacts in navigating this process. As teams gear up for the Y-Prize competition, it’s important to seek out opportunities to collaborate with students from different backgrounds in order to synthesize a variety of skill sets. Coupled with finding appropriate mentors, these collaborations are essential to the ideation and commercialization processes.