On Saturday, February 25th, 2017 five finalist teams from across the country came to Penn to pitch their solution to a problem related to air or space. The inaugural Penn Aerospace Pitch Competition, hosted by the Penn Aerospace Club, invited teams of 1-5 undergraduate and graduate students to propose aerospace-related startup ideas for a chance to earn prize money and feedback from industry leaders.

The five finalist teams, hailing from Brown University, Purdue University, Rutgers University, and the University of Pennsylvania, were selected out of 24 entrants from 10 schools across the nation. The proposals were judged based on their articulation of the problem to be solved, impact of the solution, market potential, technical feasibility, and entrepreneurial factors. 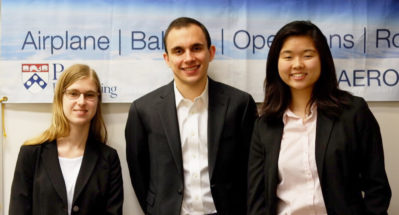 Taking the first place prize of $5,000 was Penn’s own ProtoFluidics, a platform for microfluidics research in space presented by Jaimie Carlson (ENG ’18), Laura Gao (W ’18), and Adam Zachar (ENG ’18, GEE ’18). The team plans to bring streamlined rapid prototyping to microfluidic research in space and on Earth.

“Using our modular microfluidic architecture, custom software platform, and the 3D printer already aboard the International Space Station, we will allow researchers to design, create, and test microfluidics in space cheaply and quickly,” said team member Adam Zachar. The team’s proposed technology will scale to terrestrial development, allowing researchers to iterate and share designs far more easily than they could before.

“Eventually, we believe 3D printing microfluidics will become an integral part of both industrial & academic microfluidic research, in space and on earth,” Zachar added. This spring the team plans to start on-boarding their first customer academic labs, in parallel with working to secure their first 3D print aboard the International Space Station.

“The presentations were all very impressive! It was inspirational to learn about the aerospace innovations these young entrepreneurs envision,” said Greg Howard, founder and director of the competition.

Zachar added, “The judges were amazing. Their industry experience really helped them ask the best questions and give the most valuable feedback. Some are even helping us move forward, and connecting us with more potential partners and customers.”

The Penn Aerospace Pitch Competition was made possible by sponsorship from the Mack Institute, the Boeing Company, ATLAS Space Operations, AAC Microtec, and the Wharton Aerospace Community. Michael Carey, Co-Founder & COO at ATLAS Space Operations and President & CEO at AAC Microtec North America, said, “By sponsoring, we provide the foundation of confidence to young entrepreneurs to begin their journey. Having spent decades grooming and empowering others to achieve and grow has been immeasurably rewarding. We are investing in a greater aerospace ecosystem at its earliest stage of life.” Carey added that his favorite part of the competition “was the enthusiasm of the competitors and the organizers — bright leaders with equally bright futures.”

Interested students and professionals can learn more and sign up for updates about next year’s Penn Aerospace Pitch Competition at pennaeropitch.com.

About the Penn Aerospace Club

One comment on “Student Entrepreneurs Win $8,500 at the Inaugural Penn Aerospace Pitch Competition”